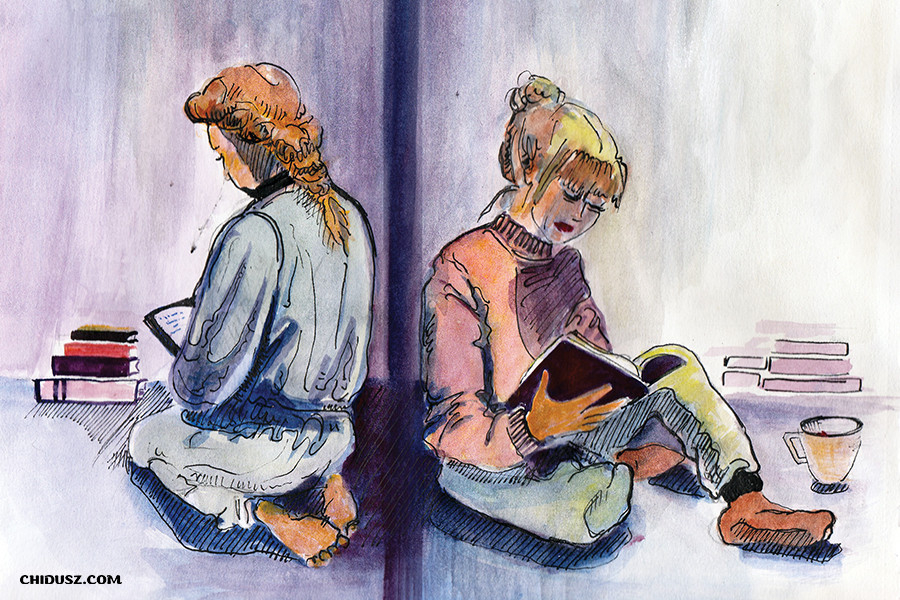 Two women, each in their own apartment, sit absorbed in their reading. The June issue of Chidusz, which comes out after a nearly two month long lockdown, focuses almost entirely on literature.

Oyf fremder erd, published in Vilnius in 1925, is an early collection of stories by Israel Joshua Singer, the older brother of the Nobel Prize laureate Isaac Bashevis. After 95 years the book comes out in Polish translation by Krzysztof Modelski (Na obcej ziemi). We publish one of the stories, The Old Town, which opens the collection.

The story is preceded by an interview with Joanna Lisek, professor of Literature Studies from the Taube Department of Jewish Studies at the University of Wrocław.

Yonatan Berg is the youngest poet to receive the Israeli Yehuda Amichai Prize. Last year, a collection of his poems entitled Frayed Light came out in English. “Yonatan Berg’s poetry moves between roughness and tenderness. His military poems are written with boyish insouciance, mingling horror with grief. A serene moment swiftly becomes an elegy. Bitter ambivalence makes the song of this poet. I like this song”, wrote Adam Zagajewski, Polish poet and essayist, whose works Berg admires. In an interview for Chidusz from 2016, Berg admitted that his own poetry “feels very Polish, definitely more Polish than Israeli”.

We publish four poems, translated from Hebrew by dr. Wojciech Tworek from the Taube Department of Jewish Studies at the University of Wrocław. 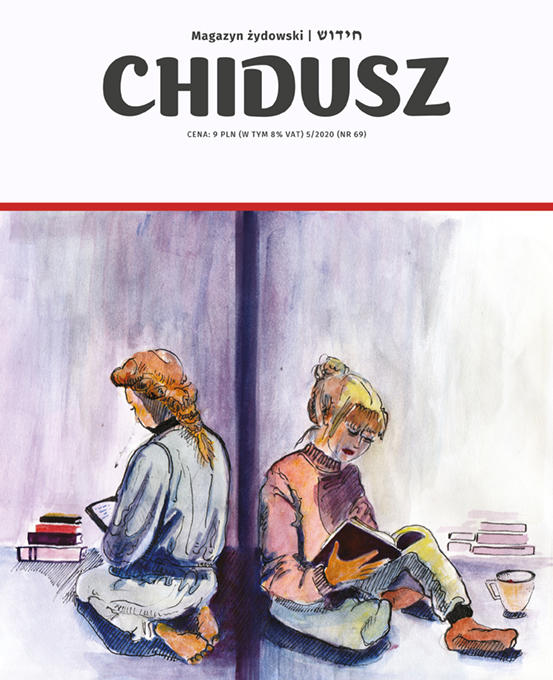 The popularity of the Yiddish translation of Harry Potter and the Philosopher’s Stone, the first book from the series of seven novels by J.K. Rowling, came as a surprise to its Swedish publisher Olniansky Tekst. The first edition of 1000 copies was sold within two days. Now, already the third edition is on its way.

Magda Wójcik spoke to Arun “Arle” Viswanath, the Yiddish translator of the book.

Throughout the period when so-called second circulation (drugi obieg) existed in Poland, over 6000 books and 5000 press titles were published with the omission the official censorship. The topics raised concerned the criticism of the communist system, historical events omitted in the official discourse, and literary works that were labelled as threatening to the system.

Michał Bojanowski spoke to Martyna Grądzka-Rejak and Jan Olaszek, historians and authors of the newly published book Holokaust, pamięć, powielacz (Holocaust, Memory, Duplicator), who researched how the topics related to the Holocaust were presented in the underground publications.

Elu ve-elu. The Birth of the Democratic Judaism

“Two thousand years of mourning after the destruction of the Second Temple obliterated all the criticism that had been directed towards it before.” Joanna Maria Machel writes about the internal changes within Judaism on the threshold of the Christian era.

The Spiritual Roots of the Environmental Crisis

“Human beings believe, in their arrogance, that if they continue developing the world on the basis of an ever-expanding science and technology, they will eventually achieve an environment that will afford everyone unlimited gratification of the senses and a life of untrammelled ease and pleasure. There can be no greater error than this”, rabbi Yonatan Neril starts his article with a much relevant quotation from rabbi Eliyahu Dessler, who died in 1953. Rabin Neril explains how taking responsibility for one’s actions, being present in the moment, and long-term thinking can positively affect the environment.

The original English text of the lesson from the current issue of Chidusz can be found on Canfei Nesharim website, together with seventeen other teachings from Uplifting People and the Planet: Eighteen Essential Jewish Lessons on the Environment.

As always, we publish a new chapter of Der Shvartser Yunger-mantshik by Jacob Dinezon, in translation from Yiddish by Magda Wójcik (this time a lot of vodka will be drunk in the Mogilev synagogue) and a queer commentary to the weekly Torah portion, this time to Chukat (by Jacob J. Staub).

Issue 5/2020 of Chidusz is published in cooperation with The Wrocław Publishing Program.