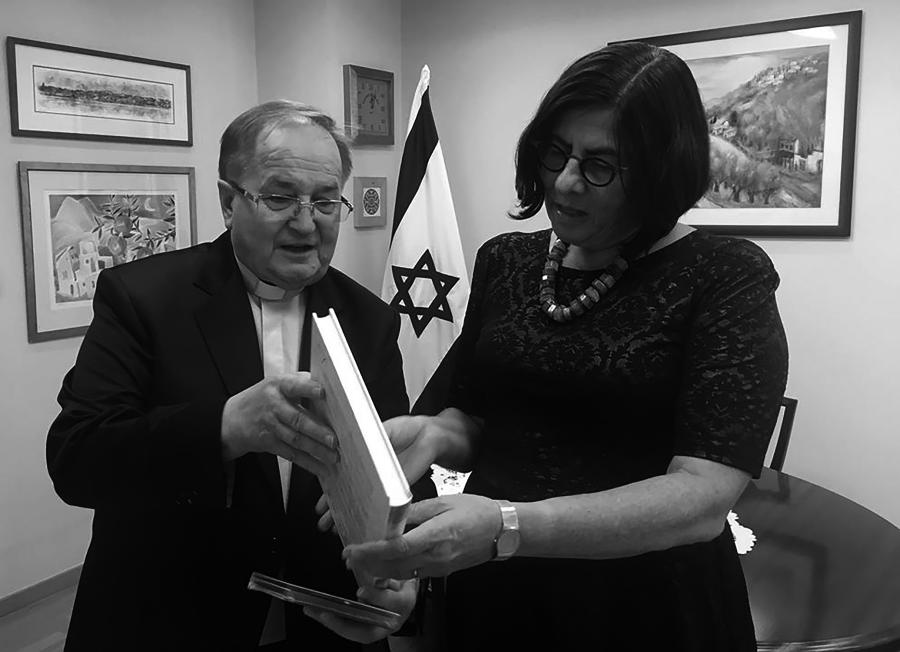 Father Tadeusz Rydzyk is the founder of the largest Catholic radio station in Poland. An able political manipulator who relentlessly perpetuates anti-Semitic conspiracy theories through his personal media network, Rydzyk has become the face of the most discriminatory and anti-progressive faction of Polish Catholicism. Poland’s right-wing parties both love and need him: Rydzyk controls many of their religious voters. So why is he suddenly making so many Jewish friends?

This is the peculiar story of an unlikely conversion. Over the past few years, Father Tadeusz has been busy: he has built a Chapel of Remembrance to honor Poles who saved Jews during the war; he has been a guest at Shabbat dinners; and he has paid an official visit to the Israeli Ambassador to Poland—all without interrupting the conspiracy theory broadcasts he is famous for. Clearly, the conversion process isn’t always necessarily thoroughgoing—much like friendships which do not always have to be genuine.

In late 2013, Father Paweł Rytel-Andrianik – a member of the Christian Friends of Yad Vashem, who holds a PhD in Hebrew Studies, and has been spokesman for the Episcopal Conference of Poland since July 2015 – started gathering information on all the Poles who helped and saved Jews during the Second World War. (…) In November 2013, he explained, as a linguist and a polyglot, what the (new) meaning of the Chapel of Remembrance is.

“The name … refers to the words ‘remembrance’ – to remember – and ‘chapel’, a place of prayer. Therefore, it is a place to remember and pray for all those who laid down their lives in order to save other human beings,” he explained. He also added that he had applied the same standards as Yad Vashem when collecting information about those who played a role in helping Jews. Having lived in Jerusalem for many years, and having visited the Institute’s archives on numerous occasions, Rytel-Andrianik cannot possibly be unaware that the Commission for the Designation of the Righteous is made up of a range of historians, and that the documents on each case are often collected and analysed for years. Cases are shelved if any doubts arise as to whether the rescuers’ intentions were anything other than altruistic. However, Radio Maryja, heavily promoted by both TV Trwam and Nasz Dziennik, a daily journal, in a few short years has managed to gather and verify as much data on the Poles Righteous as Yad Vashem has since its inception. In December 2013, Rytel-Andrianik boasted that he was receiving fifty phone calls a day. Almost 20,000 applications were collected. He was quick to make it known that they “now have testimonies that could not have been found in any book. Nor online, for that matter. These are brand new names. Our listeners submitted names in response to Radio Maryja’s appeal. That’s why our work is so beautiful.”