The March issue of Chidusz comes out just before Purim, hence we write about the holiday’s music, ADORNMENTS of the oldest Meghillot, but most importantly about two heroines: Esther and Vashti.

Bronisława Stępniewska, who survived the Holocaust under the kitchen floor in a house of a Catholic Pole, gives an account of her wartime experiences and a tragedy that stroke her family many years after the war. Jurek Hirschberg, a child of Holocaust survivors, tells about his life in post-war Katowice, the experience of March ’68, and his emigration to Sweden in 1969.

The red cover refers us to two holidays – Purim and International Women Day. On one hand, we take a closer look at Esther, who eventually manages to save her people. On the other, we analyze the behaviour of Vashti, who pays maybe the highest price for her disobedience. The queen doesn’t want to dance naked in front of men, yet, at the same time, forces young Jewish women to do what she refuses to do. Esther, who surrenders herself to the patriarchal structure, eventually manages to topple it – or does she not?

The rhino visible in the background of the cover existed for real. Her name was Klara and she came to Europe from India in the mid-18th century, causing a remarkable rhino-mania. Klara appeared on paintings, china, coins, and on one of the pages of a Meghilla that is nowadays part of the New York Jewish Theological Seminar’s collection. In an interview with Michał Bojanowski, dr Dagmara Budzioch tells about other peculiar adornments she discovered while researching old Meghillot.

The name of Haman is traditionally being drowned out by grages during the reading of the Meghilla. The same primitive instrument is also used in symphonic pieces, when a really loud sound is needed (for example in Till Eulenspiegel’s Merry Pranks by Richard Strauss). Yet, the grages are of course not the only recurring instrument in Purim music. Dariusz Latosi writes about melodies inspired by the story of Queen Esther.

Fryderyka Stein survived the war in her home town of Śniatyń, under the kitchen floor of Bronisława. When Bronisława decided to take in a whole Jewish family, she made a promise on behalf of the Steins that if somehow they survive, they will become Catholics. When the war ended, in a small church on the outskirts of Oława, Fryderyka was baptized and took the name of Bronisława, her saviour.

This month marks another (fifty second) anniversary of March ’68 and the antisemitic purge by the Polish communist government. Jurek Hirschberg, born to Holocaust survivors parents, was a student of the Silesian University of Technology, when he found out that his brother, who had passed all the exams with flying colors, was crossed out from the students list. The family left for Sweden. Today, after years of working with IT, Hirschberg is an authorized translator from Polish, Swedish and English, and has translated, i.a. Czesław Miłosz’s Poetic Treatises. 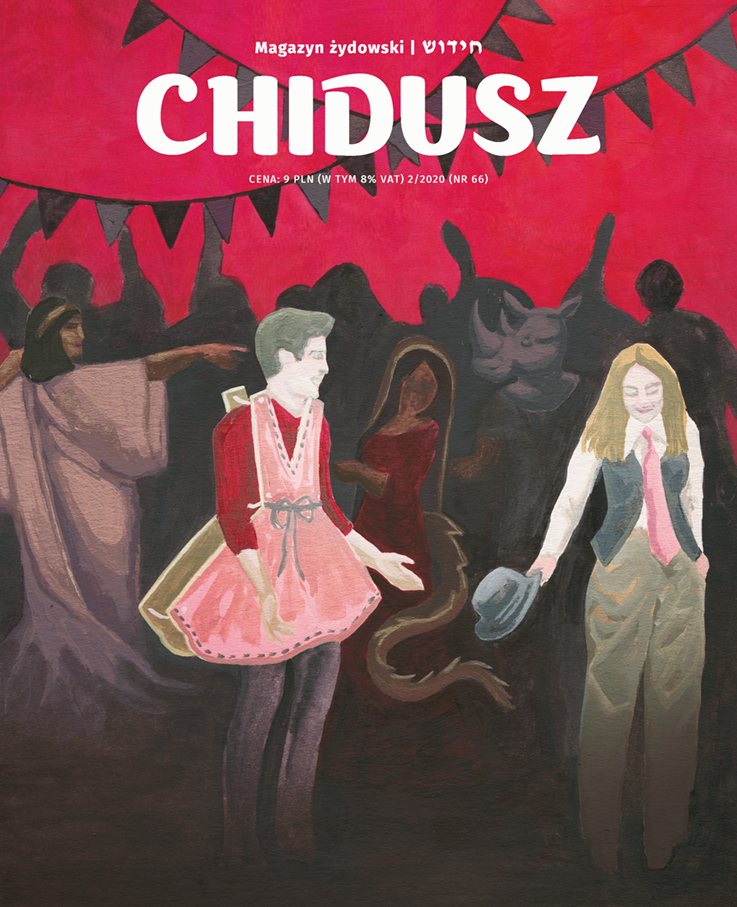 As always, we publish a new chapter of Der Shvartser Yunger-mantshik by Jacob Dinezon, in translation from Yiddish by Magdalena Wójcik, and two queer commentaries to the weekly Torah portion, this time to Pekudei (by Lisa and Laurence Edwards) and to Vajikra (by Charlotte Elisheva Fonrobert).

Issue 2/2020 of Chidusz is published in cooperation with The Wrocław Publishing Program.