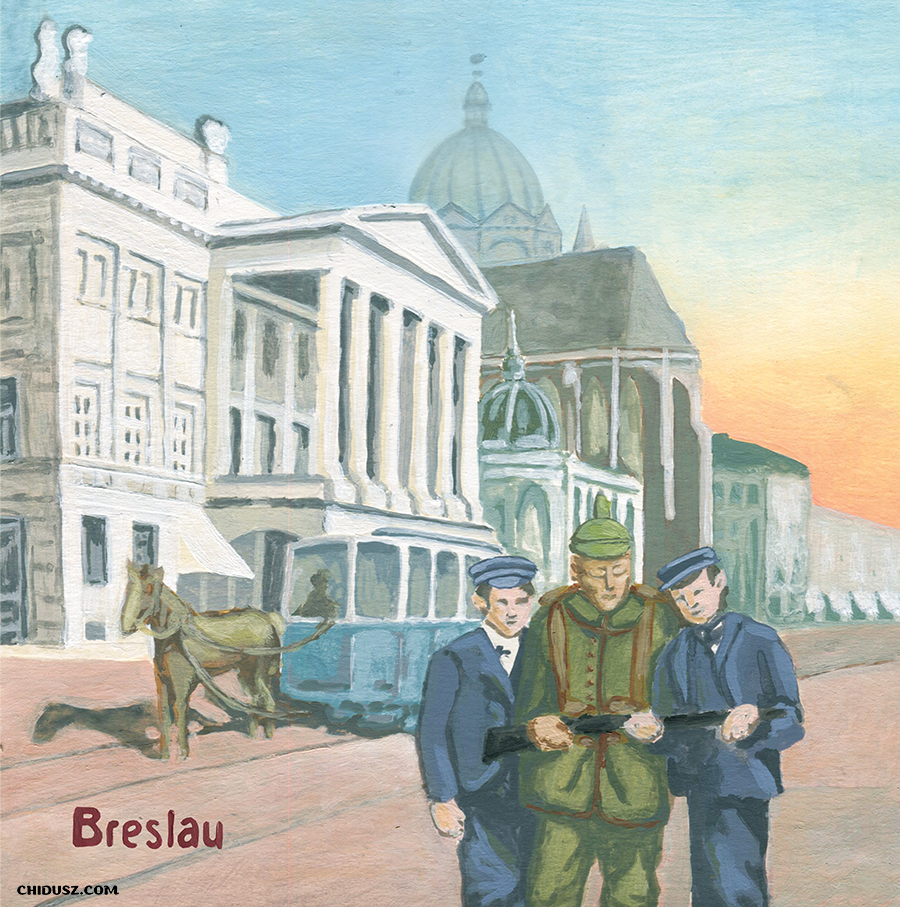 At the end of last week Chidusz 5/2019 was delivered to bookstores, libraries, Jewish communities across Poland, and all our subscribes.

In the issue you will read about:

The nostalgic cover illustration inaugurates a new series of texts in Chidusz.

Rudi Herrnstadt was born in Breslau, his family managed to emigrate to South Africa before the war broke out. In the 1980s he decided to describe his childhood and family history for his grandchildren. Recently, one of the grandsons contacted the Wrocław Jewish Community and told us the story of Rudi’s memoirs. In the summer, he is also planning a visit in the city of his ancestors.

Rudi Herrnstadt’s memoir brings back a piece of the city’s forgotten Jewish history.

I cannot say exactly where in Breslau I was born, but I remember very vividly our flat in Lothringer Strasse 3 [in post-war Wrocław, the no longer existing Ostra street], situated in a good area within easy reach of shops as well as the main tram traffic which brought one into the centre of the city, within twenty minutes or so. Most trams were then already run electrically, although I still remember trams drawn by horses — begins Rudi Herrnstadt. His story describing the life of a middle-upper class Jewish family in pre-nazi era Breslau will be continued for the four upcoming issues.

The year 2019 marks the 100th birth and the 10th death anniversary of Marek Edelman, the last surviving leader of the Warsaw Ghetto Uprising. Although both dates could become a perfect occasion for the Polish government to commemorate Edelman and declare him one of the patrons of 2019 (a long practiced custom celebrating remarkable Poles), it has not happened that way. In Chidusz we decided to critically look at the texts Edelman left behind and at ways the contemporary journalist, writers and filmmakers deal with his legacy.

In the first article, Walka Marka Edelmana [The Fight of Marek Edelman], Michał Bojanowski reads The Ghetto Fights, Edelman’s first and the most important text (as he himself oftentimes admitted, usually when he became irritated with journalists’ questions to which he would claim he had answered in the book already) written just after the end of the war. Among many impactful fragments, it is the Bund’s — as we would say today — media battle that its members had to wage in order to convince Warsaw Jews about the inevitability of their fate that seems not to have gotten enough attention in everything what others had to say about Edelman. The Ghetto Fights, written in Edelman’s own words, is certainly underestimated, especially in comparison to the popularity Hanna Krall’s Shielding the Flame enjoys, being to a big extent a literary creation, loosely connected to historical facts.

The second article deals with a new docufiction movie by Jolanta Dylewska Marek Edelman. I była miłość w getcie [Marek Edelman. And there was love in the ghetto], an unsuccessful attempt to combine Edelman’s narration with scenes played by actors. The movie strikes with cheap effects, both when it comes to production design (for instance the snow-white bed linens in the ghetto hospital) and to the story presented.  Dylewska oversimplifies Edelman’s message, omits more intellectually and morally challenging questions, and does not succeed in creating anything more but a comforting Holocaust love story.

On the side of those who get beaten up

When Marek Edelman was asked what does it mean to be a Jew, he answered: ”It means taking the side of those who get beaten up”. In today’s Poland there is no group that would be a more prominent target of the national and pro-government media’s campaign against them than the LGBT people. This situation was one of the key-factors in our decision to start publishing queer Torah commentaries last year. In this issue of Chidusz we publish a Polish translation of rabbi Daniel Landers’ text in which he explains his motivation behind becoming the first orthodox rabbi to ordain an openly gay person. Landers explicitly states that gay people, which are also to be found among orthodox Jews, need rabbis who would understand their experiences.

Camille Shira Angel in her commentary to parashat Shelach writes:

Caleb and Joshua were the two optimistic spies who God determined each had a ruach acheret, a “different  spirit.” As long as queers are not grasshoppers in our own  eyes, we can use this passage to cultivate within ourselves “a different spirit,” the spirit that brings with it the  intrinsic qualities of compassion, courage, and perseverance. (…) We celebrate the certain knowledge that our ruach acheret, our different spirit,  coupled with our inherent ruach hakodesh, our sacred  spirit, can be our guide on the individual and collective  journey toward transformation.

In the early 1990s the Swedish group caused turmoil among Israeli politicians, who claimed their super-hit song Israelism offended the religious feelings of Jews all over the world. Army of Lovers was singing that “sex is kosher on the Shabbat”, but also used a lot of other Jewish references in their videos and lyrics. All of them were however self-mocking, as two band’s members, Jean-Pierre Barda and Dominika Peczynski, were raised in traditional Jewish families and received Jewish education. In 2018, Israeli director Asaf Galay (known also for his great documentary about Isaac B. Singer) made a movie entitled Army of Lovers in the Holy Land, in which he follows the now fifty-year-old Barda on his aliyah to Israel. The movie won the Best Israeli Documentary award in Haifa Film Festival last year.

Ruth — a convert to Judaism, a devoted daughter-in-law, a woman of many values. Yet, the biblical story of Ruth also conveys an important lesson on the Jewish approach to helping the poor. It tells the contemporary Jews that sharing one’s wealth is good, as long as not taken to the extreme. The sought-after ideal in any society should be that many people offer small shares of their wealth, rather than one person or a small group decides to completely or almost completely get rid of their money in order to support those in need. The well-being of the poor is a common responsibility.

It is already the fourth chapter of Edednia – a City of the Future that we publish in 2019. This time we are being taken on a journey with aerotrain, a comfortable means of transportation that can accommodate over a hundred of passengers, and analyse the topics that the press in Edenia deals with. Since, the “city of the future” is a utopia came true, you are correct in the guess that Edenia’s newspapers are quite boring.