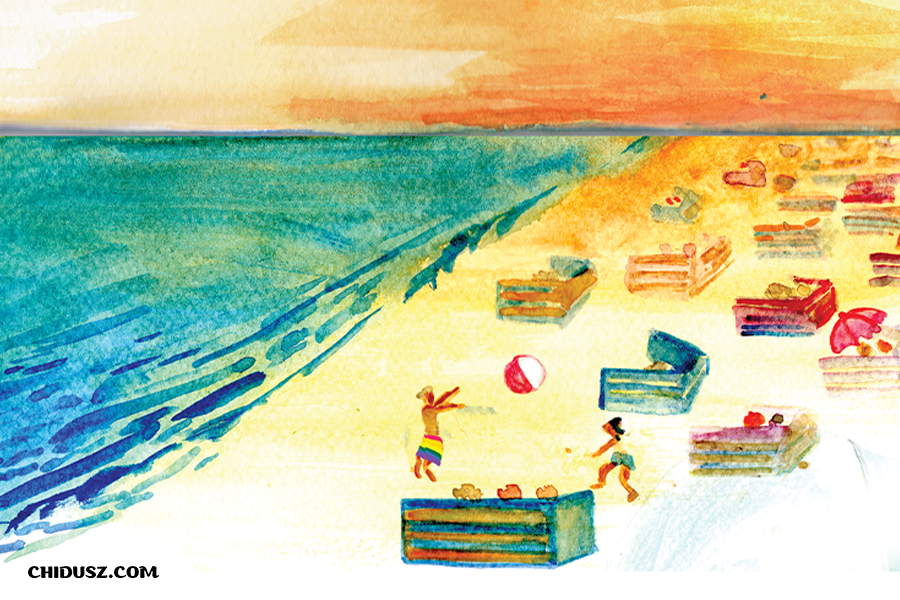 The summer issue of Chidusz comes out on the eve of Polish presidential elections. During the campaign the Polish right has intensified its efforts of convincing their voters that the “demoralizing LGBT ideology” and the Jews – who want to put their hand on “Polish property” – are real and by far the most dangerous threats to the Polish nation.

In our cover picture, Poles sit behind their windbreaks while a colourful gay and a Jew play a white-red ball over their heads.

In the midst of declarations in which the right-wing politicians promise to “deal with” with the “LGBT environments”, Chidusz reminds the words of Susan Sontag: “Jews and homosexuals are the outstanding creative minorities in contemporary urban culture. Creative, that is, in the truest sense: they are creators of sensibilities. The two pioneering forces of modern sensibility are Jewish moral seriousness and homosexual aestheticism and irony”.

We open the issue with a text written in the 1970s by Yevgeny Kharitonov, actor, director and playwright, who was considered the informal leader of the gay culture in Russia. In his home country, his controversial works were published in second circulation, while abroad they have never gained much popularity. In Brochure (Listovka) Kharitonov compares the difficult situation of the Russian gays to the one of Jews and criticises “the backward Soviet morality”, which, he claims, will collapse as an aftermath of the gay revolution.

Michael Sorkin, who died at 71 in the coronavirus pandemic, was one America’s most recognized architects and urban critics. He used to say that architecture is never apolitical. In his articles, books (like Against The Wall: Israel’s Barrier to Peace which he edited) and lectures he always remained faithful to the opinion that well designed urban spaces can contest the system and be a tool in the struggle for social equality. His essay Pinkwashing Zion Square (which came out in the collection What Goes Up: The Right and Wrong to the City) is a personal protest against the manipulative use of the term ‘tolerance’.

The collection of testimonies and firsthand accounts concerning the Holocaust in the Soviet territories was complied already in the 1940s, but the first Russian edition of the book came out only 50 years later.  Now, The Black Book of the Holocaust, edited by Vasily Grossman and Ilya Ehrenburg, comes out in Polish, prepared by the Jewish Historical Institute in Warsaw.

In the 1920s, still before the so-called numerus clausus was introduced, students of numerous Central and East European medical schools started demanding that their Jewish colleagues practice necropsy only on Jewish bodies. The impossibility of meeting these demands caused violent attacks and antisemitic demonstrations to eventually – together with Aryan paragraphs adopted also by e.g. the Association of Medical Doctors in Poland – lead almost to a total exclusion of Jewish students from medical schools.

Most of Jehovah’s Witnesses do not have the faintest idea about the pact their leaders wanted to make with Hitler. Neither do they know about antisemitic articles that the Watch Tower Bible and Tract Society used to publish in the past and never apologized for them. The purple triangle, on the other hand, is a symbol recognized by everyone within the community.

The article does not only tell the lesser-known history of the Watch Tower Bible and Tract Society, but it is also a testimony of a former Jehovah’s Witness.

The Rise and Fall of Kurt Weill

He owed his fame to the operas he wrote about thieves and prostitutes and mastered the art of mixing high and low culture. As one of the first composers he sought to employ his music in the ideological struggle, being completely open about his Marxist views.

We publish the first part of Dariusz Latosi’s  story about the composer who escaped the nazi Germany in 1933 and completely lost himself to the world of Broadway musicals.

In his youth days he fought against the Soviets, then in September 1939 he was one of the soldiers defending Warsaw. Incarcerated in an oflag, he was spared from the Holocaust. In the post-war years his socialist activities and his struggles to always help the discriminated and disenfranchised put him to jail again.

Bolesław Drobner was the first Polish mayor of Wrocław (former Breslau). In 2018 Paweł Hreniak (Law and Justice), the voivode of Lower Silesia, decided to remove his monument, although  Drobner was not recognized as a communist by the Institute of National Remembrance. Almost simultaneously, an elementary school named after Drobner decided that he is not a worthy patron because of his political views. Now, Bolesław Drobner Street in Wrocław is the last visible legacy of the socialist politician and activist.

As always, we publish a new chapter of Der Shvartser Yunger-mantshik by Jacob Dinezon, in translation from Yiddish by Magda Wójcik  and two queer commentaries to the weekly Torah portion, this time to Masei (by Amber Powers) and Matot (by Lisa Edwards). Especially Going Ahead, the commentary of rabbi Edwards, which deals with issues like homophobia and the ways the more brave and avant-garde members of marginalised groups clear the way for the shy, is a worth-while text to read in the current political circumstances. In the cycle of ecological commentaries, we publish rabbi Yonatan Neril’s text Passing the Test of Wealth in which the author examines Judaism’s teachings on material goods. The original English text of the lesson from the current issue of Chidusz can be found on Canfei Nesharim website, together with seventeen other teachings from Uplifting People and the Planet: Eighteen Essential Jewish Lessons on the Environment.