It has been our tradition since Chidusz was founded that in the September issue we publish summaries of the previous years and listen to the prognoses Polish Jewish leaders, journalists, and intellectuals have for the upcoming months. As always, we open the issue with New Year’s wishes from the Chief Rabbi of Poland Michael Schudrich, who is also the founding member of Chidusz Jewish Foundation. We would like to quote a passage from his text, taking the opportunity of joining him in wishing you a New Year full of togetherness and reconciliations.

We read in DT 12:9, „God will grant you safety from all your enemies and you will live in security.”

Rabbi David Moskowitz (known as the Gelilay Zahav) asked the following question: If god has granted us safety from our enemies, why does the Torah then add „you will live in security”. It is redundant and unnecessary.

In this past year, we have heard more antisemitism voiced out loud than in the past. Not only here in Poland but throughout Europe and yes even in the US. How are we to react in a situation where one might feel less safe, less secure as in the past 30 years?

The first step in fighting antisemitism is to love and respect the person standing next to you.  This is not the only step but it is the first step. Let’s all take this first step as we begin together 5780!!

Another rabbi based in Poland, Yehoshua Ellis (who currently works alongside rabbi Schudrich in the Warsaw Jewish Community), wrote a Rosh Hashana text in which he refers to himself as Baal Teshuva, a master of return. Rabbi Ellis describes his youth (thus the appearances of cheeseburgers and bongs in his article) and the ways in which even the most rebellious and nonkosher past paves the way for becoming a better Jew and a better Jewish leader.

Henryk Grynberg, a Polish-Jewish writer living in the United States, and professor Stanisław Krajewski, a Polish-Jewish philosopher and mathematician, both wrote their summaries of 5779. Grynberg, whose father and little brother were killed by Polish peasants during the war, alludes, among others, to the ongoing debate about the extent to which Polish Christians were helping Jews, and to another current discussion about the compensations Polish government would have to pay to the heirs of the pre-war property owners. Krajewski, one of the creators of the POLIN Museum’s exhibition, points to the still unresolved crisis concerning the lack of ministerial nomination for the new, rightfully elected museum director. He contemplates the nature of the crisis, concluding that the upcoming parliamentary elections will bring at least a partial answer to the questions rankling everyone concerned about the fate of Jewish institutions in Poland.

The texts from the Torah Queeries anthology chosen for this issue of Chidusz also remain in the Holiday spirit. A lesbian rabbi Linda Holzman writes about the importance of diversity in Jewish communities, which she exemplifies by a story of erecting a sukkah. The text preceding that one, written by Martin Kayka, is, on the other hand, a commentary to prasha Vayelech, second from last in the yearly Torah reading cycle. In the article (which could be as well humorously entitled The Covenant of the Dishwasher) Kayka recounts the life with his late partner and the grief after his death, comparing it to the situation in which Israelites found themselves in the face of Moses’ death. 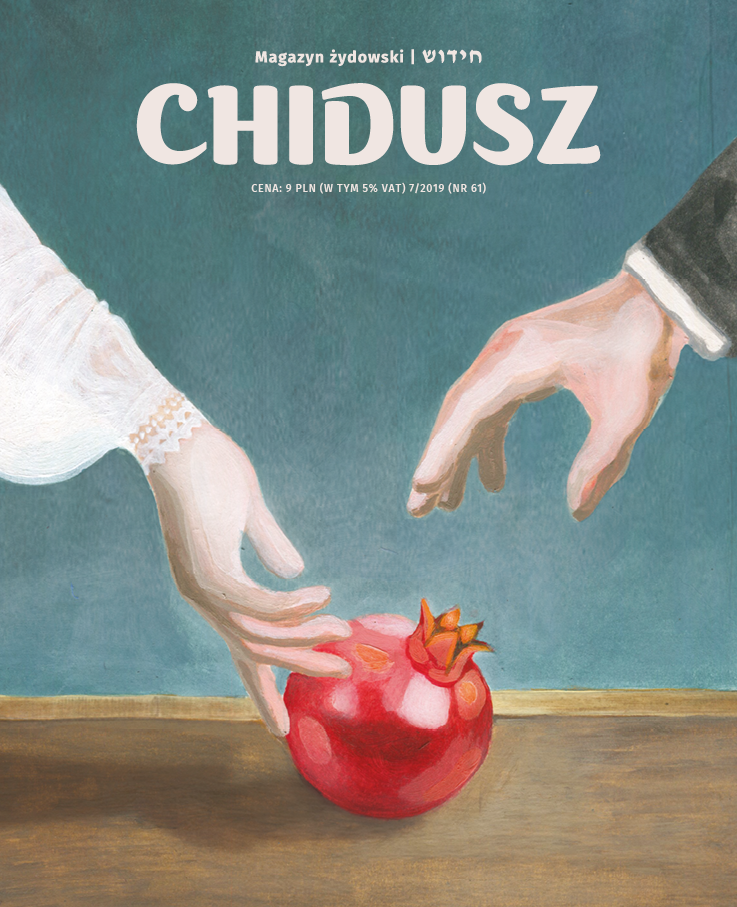 The pomegranate on the cover illustration (by Edyta Marciniak) does not only symbolize the New Year festivities. In this issue of Chidusz we publish an interview with professor Benjamin Brown (Department of Jewish Thought at Hebrew University), who explains the concept of kedusha, a pietistic ideal of far-reaching sexual abstinence, widely practiced in three Hasidic groups nowadays. Men belonging to these communities are permitted to have sex only one to three times a month, and a number of restrictions applies also to their everyday lives. The ban on touching the wife’s hand in public would be one of them, thus the hands on our cover do not meet.

In this issue of Chidusz we are coming to the end of Edenia – a City of the Future, a novel which Magdalena Wójcik has been translating from Yiddish since March. The tragic end of Edenia’s protagonist, Zalman Kindiszman, means a new beginning for us. In the next issue of Chidusz we will publish the first chapter of a new Yiddish novel (we have already picked one, the title will be revealed soon!).

At the same time, another cycle continues. The third chapter of Rudi Herrnstadt’s memoirs starts in 1933. Rudi, as all Jewish barristers in Germany, cannot pursue his occupation. For some time he makes his living working as an incognito legal counselor for his previous associate, and then for his father’s company. As the financial and political situation harshen, Rudi, his wife and a little daughter leave Breslau. Thanks to the help extended by friends that had already settled in South Africa, they also end up on a ship to Cape Town.

This issue of Chidusz is quite rich in religious themes. Joanna Maria Machel, who joined our team few months ago, analyses the Torah verse: “you shall love your neighbor as yourself”. How can this mitzvah be applied if someone is full of self-hatred? How can one love Hitler (a question often asked by young students)? Should one?

And, as always, we also take keep abreast of new books on Jewish topics coming out in Poland. In this issue of Chidusz, we write about Polanim. Z Polski do Izraela [Polanim. From Poland to Israel] by Karolina Przewrocka-Aderet. The author, who lives in Israel, collects various stories of Polish Jews who, at different times, moved to either Mandatory Palestine or the State of Israel, and contributed to building the Jewish homeland.

Everyone who reads Chidusz regularly knows that many our articles focus on the legacy of the Breslau Jewish Community, the post-war Wrocław Jewish Community until 1968, and the contemporary, post-communist life of Jews within the structures of the reborn gmina. For the second time already, the city of Wrocław has recognized our efforts in presenting the narratives of Breslau/Wrocław Jews and granted us a subsidy towards the publication of four issues of Chidusz in 2019. The issue 7/2019 is first of them.