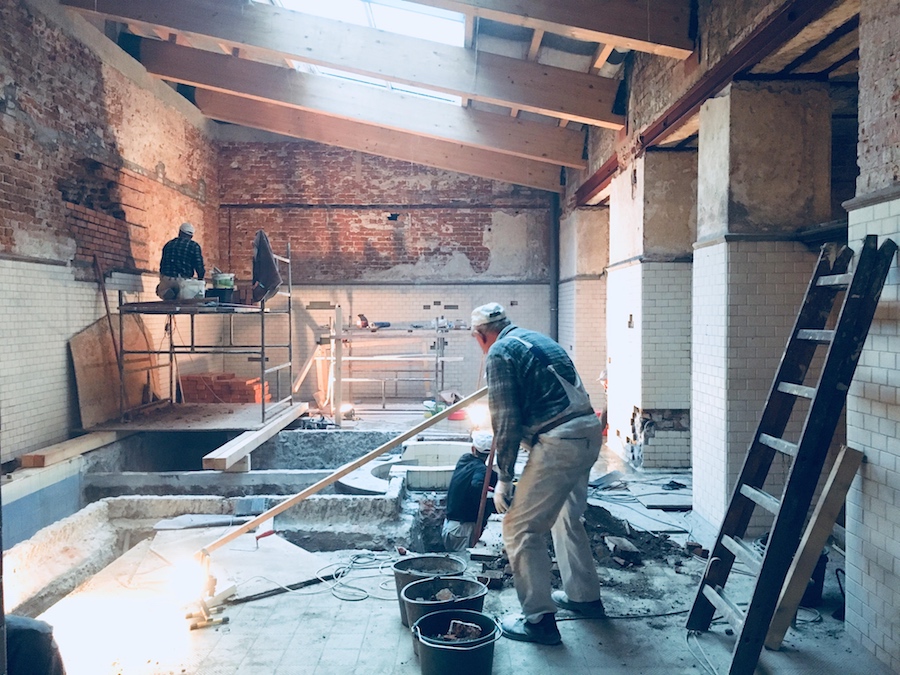 Renovation of the mikvah in Wrocław, Autumn 2017/ Photo: Tomasz Fila

“I won’t tell you more than I can, and I cannot tell you much,” she says, opening a brochure entitled Balanit’s Mission. We’re sitting at her desk by the entrance to the mikvah in Łódź. Teresa, called ‘Aunt’ by local Jewish community members, chooses her words carefully. She won’t disclose the details of the preparations which must be made prior to submersion in the water as those things are not merely technical. They’re intimate, and are “not of this world.”

In Judaism, the mikvah is surrounded by an aura of mysticism. It’s a secret place to which only women have access. In Poland, mikvahs don’t occupy a space in public awareness at all. Polish Jews, most of whom are not religious, consider mikvahs an irrelevant element of Orthodox folklore. Yet mikvahs are not relics. They are functional ritual baths for women in Jewish communities in Łódź and Warsaw, and before the end of 2018 there will also be one in Wrocław. Chabad also runs two other mikvahs for women in Warsaw and in Cracow.

What future awaits Polish mikvahs? Maria (Miriam) Szychowska thinks this problem requires a different question. She believes we should rather consider the long-term purpose of Jewish communities in Poland. Do we want there to be more Jews, or do we want more religious Jews?

The mikvah in Wrocław is over a hundred years old. It survived the war undamaged and was used by the local Jewish community until 1968. In recent years it was opened to the public on rare occasions—usually during seasonal exhibitions and for Danielle Chaimovitz-Basok’s lectures.

Can a rabbi’s wife, who will most likely become the local balanit, imagine this space being used as both a museum and a functioning mikvah?

“We will have to come to terms with this unusual situation,” says Danielle. She’s happy that it will be several months before the exhibition is installed. During that time the mikvah will be used solely as a ritual bath. Hopefully, a solution will be found for people using the mikvah such that the exhibit next door does not interfere with their religious ritual. Danielle is already researching the issue with the help of advice from her friends. She asked them what the community ought pay most attention to regarding the furnishing of the mikvah. “The problem they keep bringing up is a lack of clothes hangers. This sounds silly, but it seems that it really affects the whole experience.”