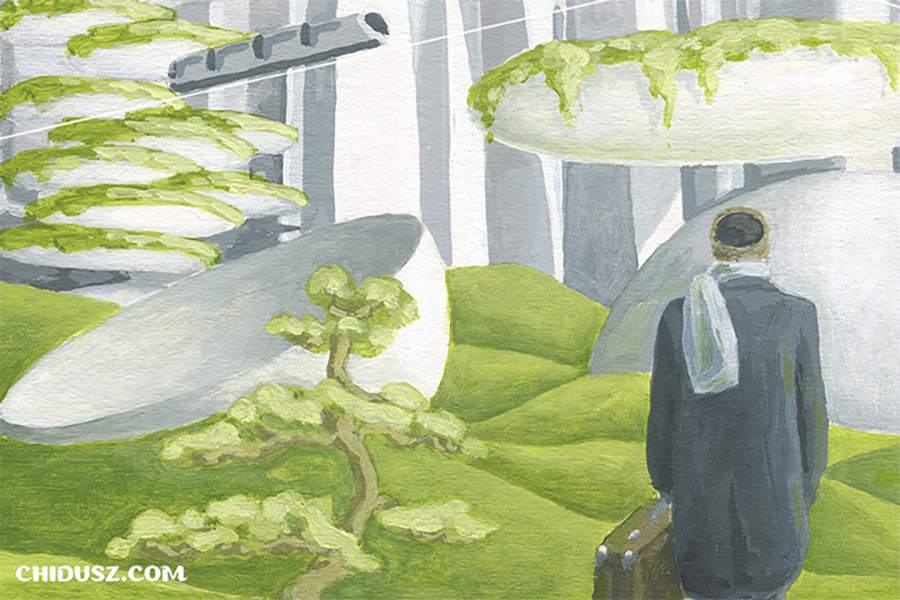 This month our cover (illustration by Edyta Marciniak) presents an artistic vision of Edenia – a City of the Future, situated in the Ukraine. This is to mark the beginning of a new Yiddish section in Chidusz—for nine consecutive issues we will be publishing fragments of a short novel by Kalmen Zingman, written in 1918 and never translated into Polish.

The issue starts with a text (by Michał Bojanowski) about the Jewish cemetery and the forlorn synagogue building in a small town of Krzepice. While describing these particular cases, the article touches a broader problem of Jewish property which was transmitted to the local authorities (as Jewish communities do not have enough resources to take care of every cemetery and of every synagogue that survived the war) who in turn promised to take care of the heritage. Nowadays the shape of most such sites is horrifying. Only thanks to the involvement of local activists and (usually) foreign foundations not everything has been destroyed yet.

Two interviews are devoted to the topic of the Israeli-Palestinian conflict. In a conversation (by Katarzyna Andersz) with professor Itay Fishhendler from the Hebrew University in Jerusalem we discuss the significance of water accessibility. Jolanta Różyło interviews Noemi Nur, an Israeli activist who decided to learn Arabic and later also teach others, employing non-traditional methods that are supposed to create a better mutual understanding between Israelis and Palestinians.

In our history section we discuss the emigration plans for Jews created by the Polish government in the 1930s (interview with Dr Zofia Trębacz, who has just recently published a book on that topic). We also write about Ernestyna Potowska-Rose, a Jewish suffragette who is more famous abroad than in her home town Piotrków Trybunalski.

We also publish an interview with Evan R. Bernstein, the director of ADL in New York/New Jersey region about the organization’s fight with on-line (and not only) hate. Speaking of hate speech, we couldn’t omit informing about upsetting news from Wrocław (where Chidusz‘s office is based)—in February the brick fence around the Jewish cemetery was devastated twice with graffiti saying “Jesus is the King”. After the local Jewish community, supported by friends, removed the slogan once, within one night it reappeared. Now the community is waiting for surveillance cameras to be installed before they professionally remove the graffiti.

As always, the issue closes with two queer Torah commentaries — one to parasha Shemini, the other for Purim.