Read what we write about in the current Polish-language issue of Chidusz.

Katarzyna Andersz interviewed Yariv Mozer, the Israeli filmmaker and director of Devil’s Confession: The Lost Eichmann tapes, which shows Adolf Eichmann as an antithesis of “merely an obedient clerk” – as he was describing himself in Jerusalem and was perceived by Hannah Arendt. Before Eichmann faced the prospect of a sentence he was a “fanatical warrior for his blood and bloodline”. “If we had sent 10.3 million Jews to death I would have said with satisfaction: very well, we have exterminated the enemy” – he admitted. 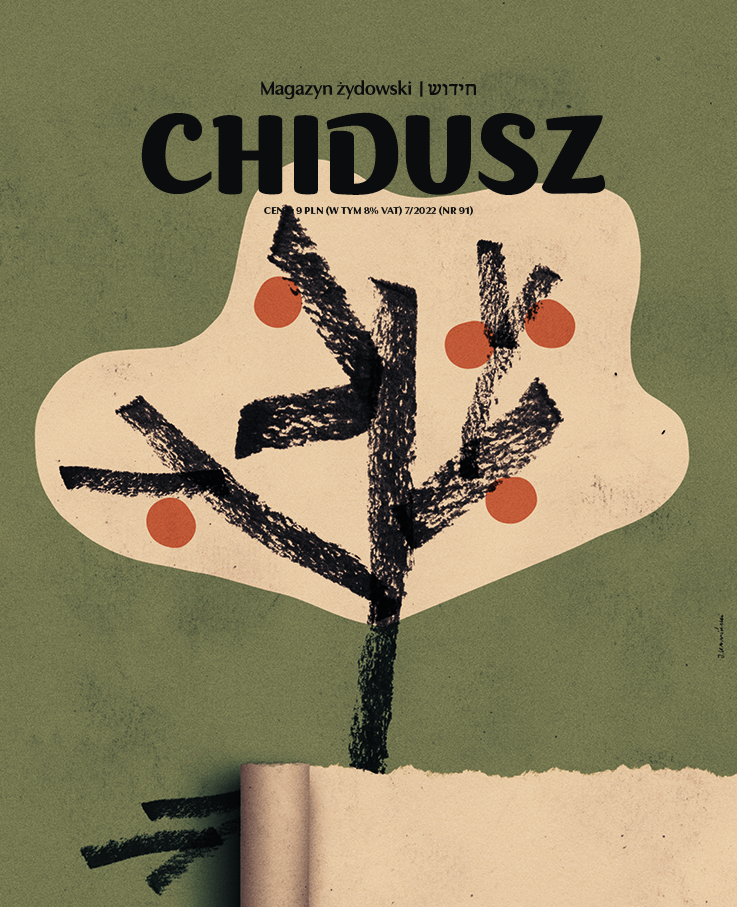 The Right Question Is Theological

What if the Otherness of women is not simply a matter of Jewish incorporation of surrounding social attitudes but is in part created and sustained by Torah itself? – asks the feminist theologian Judith Plaskow in her essay from The Coming of Lilith collection. What if the subordination of women in Judaism is rooted in theology, in the very foundations of the Jewish tradition?

Indeed, the situation of the Jewish woman might well be compared to the situation of the Jew in non-Jewish culture. The Gentile projection of the Jew as Other—the stranger, the demon, the human-not-quite-human—is repeated in—or should one say partly modelled on?—the Jewish understanding of the Jewish woman. She too is the stranger whose life is lived parallel to man’s, the demoness who stirs him, the partner whose humanity is diƒerent from his own. And just as legal changes have ameliorated the situation of the Jews without ever lifting the suspicion of our humanity, so legal change will not restore the full humanity of the Jewish woman. Our legal disabilities are a symptom of a pattern of projection that lies deep in Jewish thinking. They express and reflect a fundamental stance toward women that must be confronted, addressed, and rooted out at its core. While it is Jewish to hope that changes in halakhah might bring about changes in underlying attitudes, it is folly to think that justice for women can be achieved simply through halakhic mechanisms when women’s plight is not primarily a product of halakhah.

Jakub Kamiński, who designed the new cover of Chidusz, expressed these ideas by tearing the roots of the Tree of Life – cutting off its „male” foundations. Of course, we do not endorse the destruction of life-giving trees. We do believe though, that becoming aware of our failings is a step in the right direction. May the 5783 be full of radical, invigorating ideas!

The Disneyland of Albany is a short story by Israeli-American author Shelly Oria from her debut collection New York 1, Tel Aviv 0. In her prose, the young writer covers a whole range of issues, from addiction and polyamory to parenthood and emigration. The recurring themes of Oria’s intimate stories told with honesty and simplicity, are the cultural differences between Israelis and Americans, dissatisfaction with living in your homeland, but also the hardships of finding your place in a different country.

Did you know people used to live there? Maya was asking suddenly, her voice angry. Where? he asked. Where we went today, that plaza place, she said. It says here— she said, pointing at the book— that people were forced out of their homes to build that place. People used to live there! He leaned toward her, and she handed him the book, marking the relevant section with her finger. He read: “Above the waterline, rising like a spearhead into downtown Albany, stands Nelson Rockefeller’s Empire State Plaza, which was built during the 1960’s and 1970’s, replacing roughly one hundred acres of nineteenth- century buildings (while forcing hundreds of families out of their homes) with a complex including underground parking lots, and decorated with impressive modern art. The view from the observation deck,” Avner went on, “looks as if it were specifically designed to make one feel like a triumphant conqueror, looking over the Hudson winding toward the Adirondacks . . .” He realized he’d gone past the relevant part. This was many years ago, he said to Maya, but her eyes were furious, and he knew his words were wrong. But which words were right? She had always had Netta’s uncompromising sense of justice. Or perhaps all children were like that, assuming the world can and should always be good. So what if it was a long time ago? Maya asked. They forced people out of their homes! She was looking at him as if he himself had escorted each family out, and her eyes were tearing up. He didn’t think she cried anymore. It seemed she stopped doing that years ago, when she learned to talk. Did they use tanks? she asked. How slow he could be sometimes. How had that not occurred to him. Oh, Maymay, he said, it’s not the same as back home. It’s not what you think. Of course they didn’t use tanks. And they probably paid these people, too, for their old houses. It’s different in America. Maya looked at him suspiciously. He sighed. Remember what I said earlier, about keeping an open mind with this stuff ? That’s kind of what I meant. I don’t want to go back to that plaza place, Maya said. There’s no reason to, Avner said, except we might just have to walk by there tomorrow on our way to my meeting. I don’t want to, Maya said. Avner was surprised by her insistence. It was unlike her, to be…  difficult like that. Okay, he said. I’ll figure something out.

Part VIII of the Polish translation of Chaim Grade’s novel.

In this episode of the outstanding Yiddish novel Di agune, dayan David Zelver from Polocka street, who let the eponymous aguna remarry (and by doing so got into the Jewish Vilnius black books) has to face the wrath of other rabbis during his trial.

One and a Half Secret of the Kazimierz Jewish Cemetery

Monika and Stanisław Krajewski’s essay about the new tradition of leaving pennies on tombstones at the Jewish Cemetary in Kazimierz.

All of the preserved tombstones (there are only a dozen of them) and some of the fragments of the headstones incorporated into the wall of the monument bear coins – mainly one or two Polish groszy. They are pressed there rather randomly, vertically or horizontally, wherever there’s a piece of a ledge. There are whole piles of coins in some places and sometimes – in a jokey way – coins are being placed on a low relief depicting a moneybox, a symbol of charity. They are on all of them: the lion, the candle holder, the jar – a symbol of the tribe of Levi.

In part XI of her memoir, Kate Bornstein talks about sadomasochistic play with her owners, becoming part of the lesbian community of Seattle, and her writing career that is gaining momentum.

Most people who enter into a master/slave agreement take the time to iron out in great detail the duties and expectations of their period of service. There are plenty of well-written books with hard-won advice, all intended to make your master/slave relationship safe and the most fun possible. “You go back there right now and you refill that bucket with hot water.” I ran off to do as I was told. I could hear her laughter through the kitchen door. At least I’d made her laugh. That counted for something. There are all sorts of slaves and masters, and countless ways to live out a loving master/slave relationship. Pick an adjective, any adjective. Now, stick that in front of the word sadomasochist. That’s how many kinds of SM folks there are in the world. If you were giving yourself heart, mind, soul, and body to a pair of sadists, you’d want to know what sort of sadist you’d be owned by. Kind? Mean? Comical? Deep into the dark arts? If you were going to say Yes, I’ll be your slave to someone, you’d want to know up front what you’re getting into, before anyone put a collar on you—because that’s what they do, they put a collar on you to mark you as property. For example, you’d want to know something about the future of your own sex life, right? Like whether or not you’d have one. Was there going to be any sex with your owners, or would most of your service involve cleaning their house and baking their bread? If June Cleaver in chains was your future persona, you’d want to know if you were going to get an erotic kick out of it, right? Before the first single tail whip kissed your shoulder and made you scream, you’d have agreed upon a definition of words like fun, pleasurable, maybe, and no. You’d have worked out just who had the latitude to do what, with what, and to whom.

In a couple of dozens of short articles, among other topics, we write about the new episode of Prime Minister Morawiecki’s podcast The Painted Bird and The Black Bird; changing locks in the synagogue in Łódź; the free online publication of Hitler’s Mein Kampf; a cabbalistic curse being put on Putin; demolition of a pig farm occupying a former concentration camp and the first ever synthetic embryo with a beating heart created in an Israeli laboratory.