On the cover of the summer issue: three Polish writers, whom we celebrate this year. In order to survive the Holocaust and be accepted by the Polish culture, Tadeusz Różewicz, Krzysztof Kamil Baczyński and Stanisław Lem had to hide their Jewish “stigma”. Is Poland ready to embrace their Jewishness?

Was Krzysztof Kamil Baczyński really writing poems about the Warsaw Uprising two years before its outbreak? Is Tadeusz Różewicz’s The Survivor not about surviving the Holocaust? Both poets hid their Jewish stigma in order to survive the war, but also so that their work could take a prominent place in the Polish culture. Michał Bojanowski talks to a literary historian Prof. Tomasz Żukowski, author of “The Great Retouch” (Wielki retusz, 2018) and “Under pressure” (Pod presją, 2021).

Trying to answer the question of how Stanisław Lem survived the Holocaust, Wiktor Złotnicki guides the reader through numerous digressions, understatements and experiences of fictional characters in the writer’s fiction. For Lem, his Jewish background was a complete taboo – a subject he did not address either publicly or (with very few exceptions) privately. 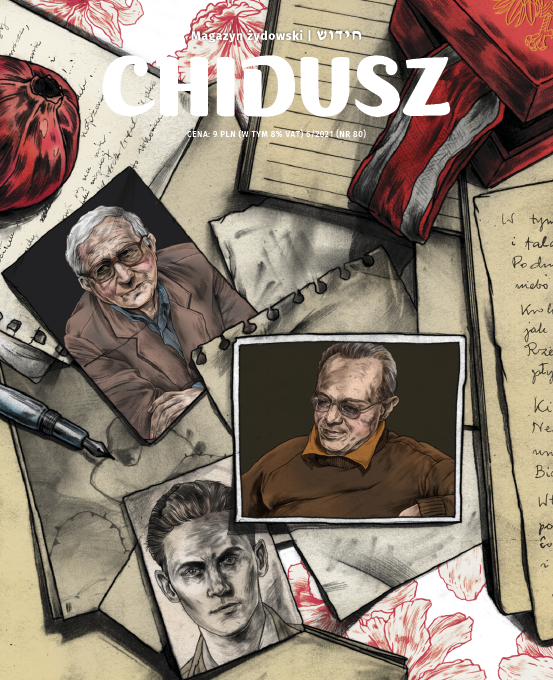 Melody of the Body

For months reporter and author Anna Pamuła (Wrzenie; Polacos) has been writing for Chidusz, presenting profiles of French Jews she encounters. In this issue, she interviews an osteopath Sam Cohen. Cohen treats many French celebrities. He is visually impaired from birth. His patients say that he heals not only their body but also the soul. “The body cannot follow us at the same pace throughout our whole life. It’s like in music: for a piece to be successful, you need a whole range of sounds, and silence… If there were only two notes, we wouldn’t be able to hear the full melody.”

There Is Only One King: The Gorgeous Pepi Littman

What do drag kings, cabaret and a certain young Jewish soldier of the Tsarist Army have in common? The gorgeous Pepi Littman – a cross-dressing female comedian known at the turn of the XIX centruy all around Europe, and almost completely forgotten today. Director Natalie Arle-Toyne and researcher Phil Alexander talk to Magdalena Wójcik about the extraordinary Jewish icon.

In the nineteenth episode of the first ever Yiddish bestseller, Yankev Dinezon’s “Der Shvartser Yunger-Manthik” (“The Dark Young Man”) Roza and Golda finally learn the whole truth about what happened to Josef. Could the young love still be saved?

Neither Adding nor Taking Away

A queer comentary to parashat Ree by Gregg Drinkwater and David Shneer:

For Orthodox Jews, to “obey the commandments” means keeping all of the 613 mitzvot found in the Torah following halacha essentially to the letter, and living a life embedded in Jewish tradition. For most Jews who approach Judaism liberally (Reform and Reconstructionist, but also Conservative Jews, to a degree), to “obey the commandments” is interpreted a bit differently. Many progressive Jews are deeply committed to Jewish tradition and the Torah but approach the mitzvot and Jewish law with varying degrees of skepticism and modification. In some cases, progressive Jews are comfortable with outright rejection of those precepts that seem to violate competing ethical standards or that do not easily conform to the realities of contemporary society.

As I matured, I took notice of the other adults around me and I made a startling discovery: There were people who seemed secretly to love Tisha B’Av. I noticed that some people, though they may have tried to hide it, were really into all the grief and lamentation. At first I was shocked. Who would want to cry and feel “bad”? And yet, I saw people for whom the day was a partial catharsis, a chance to grieve without guilt.

The First Temple As A Magic Talisman

According to the famous teaching of the Rabbis, God allowed the first Beth ha-Mikdash to be destroyed by the Babylonians because the Jews were guilty of idolatry, shedding of innocent blood, and forbidden sexual practices. While the reason for the destruction of the Second Temple was sinat chinam – baseless hatred. Joanna Maria Machel – interpreting the words of prophet Jeremiah – proves that the situation surrounding the destruction of the Temple was much more complicated.

Jewish prayers and texts reinforce this message and remind us of what our ancestors knew about water. Our prayers and texts are replete with appreciation for rain, profound recognition of the importance of water, prayers imploring G-d to provide us with water, and gratitude for the rains when they come. For example, Biblical Hebrew contains at least six different words to describe liquid precipitation (geshem, matar, yoreh, malkosh, revivim, se’irim), which denote different times and intensities of rainfall. For example, yoreh refers to the early rains of October, and malkosh refers to the late rains of April.