The white bear on the cover is the main character of a short story written in Yiddish in 1927 by Arn Meisel. In this issue we publish its first translation into Polish. Moreover, American talmudist Daniel Boyarin confesses his love to Christianity and British feminist and literary scholar Jacqueline Rose deconstructs the myth of Jewish self-hatred. Ora Dresner talks about the former residents of the most literary villa in Wrocław, where Olga Tokarczuk Foundation will have its head office.

The story of the bear by Arn Meisel (Aaron Meisel) was published in the anthology White Bear and Other Stories in 1927 in New York. The title can be misleading – if we are expecting a children tale about a polar bear, we are in for a surprise.

The bear drifts on an ice rock. The surrounding nature is beautiful, but also silent, still and sometimes overwhelming. Will something encourage the bear to abandon its home? 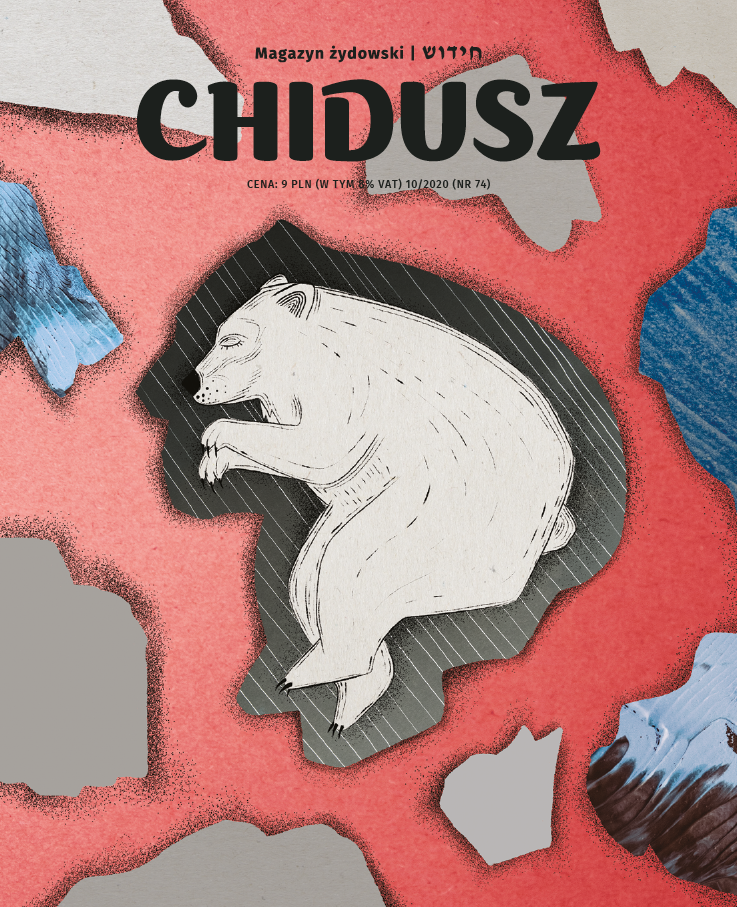 Daniel Boyarin on love for Christianity: “Some Jews, it seems, are destined by fate, psychology, personal history, or whatever, to be drawn to Christianity. I have to come clean and confess that I am one of those Jews. I cannot, of course, deny the problematic aspects of that desire; desire is frequently unruly and problematic. Christians, of course, have been bloody rotten to Jews through much of our histories, and Jews, when occasionally given the chance, have taken their turn at being rotten to Christians, as well. This desire seems sometimes to be not entirely unlike the “love” that binds an abusive couple to each other. Nevertheless, it is there. The question is, then, what creative use can be made of problematic desire, not only what pleasures can it engender but also what utile can it be in the world?”

On the Myth of Jewish Self-Hatred

An essay by Jacqueline Rose: “In this world, the charge of self-hatred, often aligned with Jewish anti-Judaism or Jewish antisemitism, can produce the very effect it is intended to diagnose. Thus Rabbi Michael Lerner, editor of Tikkun magazine, describes his encounters with young Israelis alienated from their Jewishness because they are told that their dismay at the sight of settlers violating the human rights of Palestinians with the support of the Israeli Defence Forces makes them self-hating Jews. So what then is the love that the self-hating Jew is deemed to lack?”

In 1952 Anna and Abraham Dresner moved into the villa on 29 Krzycka Street. A few years later they were joined by Tymoteusz and Maria Karpowicz. Supposedly, they ended up there by accident. Although the house was large, it was never divided into two separate flats. They lived under one roof – as one family. They pickled cabbage together and took turns adding wood to the stove. Everyone was completely engrossed in literature.

The Dresner family left Poland in 1964, and after them, in 1973, the Karpowicz family emigrated. Soon, After a few decades, the villa on Krzycka will be full of books again, serving as the office of Olga Tokarczuk Foundation.

Michał Bojanowski talks to Ora Dresner about life in post-war Wrocław, the hardships of emigration and long hours spent at the kitchen table with Maria Karpowicz.

Anna Pamuła on duvets: “After the war, the only witnesses of the life that passed were things. Jean’s father, leaving Piotrków in the 1920s, packed only a few clothes and a down duvet. He slept under it with Jean’s little brothers’ mother. Jean played with it as a child. He made roofs of houses and shacks with it in which he hid for days. ‘What did the duvet look like?’ I asked him. ‘It was red! Nobody among my French schoolmates had one. Mom was putting it in a duvet case with a hole in the center embroidered on the edges. I never understood why there was a hole there.’ Jean is 73 years old, I am 36. He was born in Paris, I was born in Krakow. But we share the same memory of a red duvet.”

Who were the Litvaks? Where was the Jewish street located? How could a Jewish community exist in Warsaw, if Jews were not allowed to settle in the capital? There are many elements of the history of Warsaw that only few people know about. Especially after becoming the capital, Warsaw was extremely diverse, attracting people from all around Europe. Jews were an important part of the mix.

Magdalena Wójcik talks to the authors of Warsze-Warsza, Paweł Fijałkowski, Marta Janczewska, Agnieszka Żbikowska and Andrzej Żbikowski, about the complicated Jewish history of the capital of Poland.

In the next episode of Yankev Dinezon’s Der Shvartser Yunger-mantshik (The Dark Young Man) Józef runs into serious trouble. The love tale we have gotten used to turns into a serious detective story.

Torah, Trees and Caring for the Earth

Eco-rabbis Akiva Wolff and Yonatan Neril on Tu B’Shvat, New Year of the Trees: “Planting trees is a long-term investment which may not bear fruit immediately.  Thus, the instruction to plant trees is an instruction to think beyond the present moment to the needs of the future.  When one is settling a new land, one might have other, more pressing needs than “planting trees!”  But the Midrash teaches us that planting – preparing for the long-term – is key to our responsibility, essential to our long-term success – and a way that we emulate G-d. By encouraging us to think for the long-term needs of our children and future generations, trees thus represent the ecological principle of sustainability.”

Jill Hammer on parsha Vayechi: “How will queer Jews remember? Only a few Biblical tales and rabbinic texts even hint at a queer Jewish story. Queer lives and memories are only beginning to be part of the Jewish landscape. Where are elders to be found? How are queer stories, values, ideas to be passed from one generation to the next? What can stories of tribal legacy mean to those whose spiritual, romantic, and family unions were shut out of Jewish life and even obliterated from history? Parashat Vayechi holds some answers to these questions, as it relates the story of blessings—and of bones.”