It has been seven years since we released Chidusz for the first time in October 2013. On this occasion we are introducing the In Brief section which from now on will open every issue of the magazine.

Among other topics we write about the history and uncertain future of the house where Adolf Hitler was born, the Hasidim trapped on the Belarusian-Ukrainian border, the new recording of Gustav Mahler’s The Song of the Earth and the 2020 “Jewish Nobel Prize”. 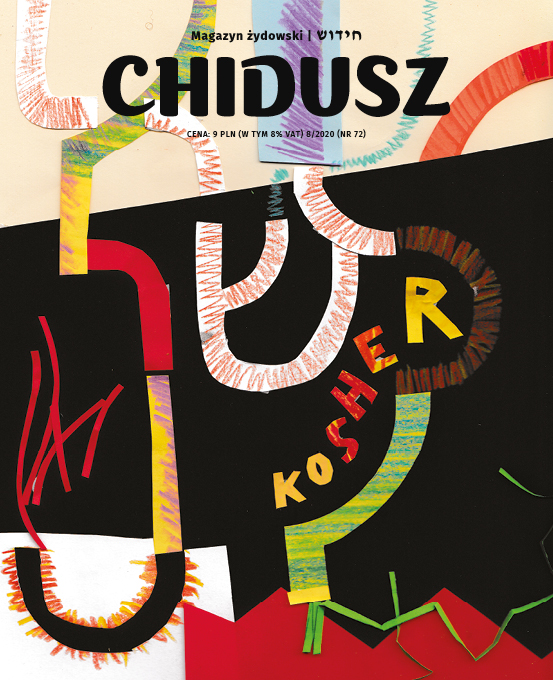 The discussion on religious slaughter in Poland has resumed once again. In this issue of Chidusz we deal with kosher food much more broadly than the politicians. Katarzyna Andersz writes about the process of obtaining a kosher certificate in Poland, kosher restaurants, where to buy kosher food and how difficult it actually is to follow the rules of kashrut. She also talks about shechita (slaughtering of animals according to kashrut) to a Polish mashgiah (kosher overseer) who is training to be a bodek (qualified “checker” who examines the inner organs of the animal to ensure that it was healthy at the time of death).

It often comes as a surprise that Wrocław White Stork Synagogue survived the Kristallnacht, the Second World War and the difficult post-war period almost unscathed. It got devastated only in the 70s, after the University of Wrocław tried to transform it, unsuccessfully, into a library. The floor was pulled off and – in order to efficiently move the rubble – a hole was punched in the middle of the eastern wall. Soon after, the renovation plans were abandoned. From that time anyone could enter the building exactly through the place the Torah scroll was kept for the last 150 years.

In the October issue of Chidusz we talk about the difficult history of destruction and reconstruction of the White Stork Synagogue. We also publish unique photographs taken in the 1980s by prof. Jerzy K. Kos, who was responsible for documenting the ruins. In an interview with Michał Bojanowski, prof. Kos talks about the interior of the synagogue and its “dwellers” in the 1980s, as well as the architectural nuances that helped Breslauers distinguish the synagogue from the Evangelical churches.

In the third and last part of the story (on the occasion of Kurt Weill’s 120th birthday and 70th anniversary of his death), Weill escapes Nazi Germany and, via Paris, arrives in New York. There he works on a Zionist opera and various musicals. He no longer creates such well-known songs as, for example, Alabama Song (performed among others by The Doors), but his life is still full of surprises.

A Jewish pimp in stripped Poland

At the end of the 19th century, the Polish press wrote about Jews who – often supported by the partitioning powers – forcibly deported women to foreign brothels. It was commonly believed that tens of thousands of women were kidnapped by Jewish pimps every year. General public’s interest in „Jewish prostitution” did not diminish, even though the numbers of confirmed cases of human trafficking stayed the same.

Was the phenomenon of trafficking in women under foreign occupation real? What was the scale of the problem, and why were the Jews blamed? Did Jewish women really dominate among prostitutes and owners of brothels? What about male prostitution? In an interview with Michał Bojanowski, Aleksandra Jakubczak, the author of the recently published book Poles, Jews and the Myth of Trafficking of Women, talks about the problem of 19th century prostitution.

Justice, justice shall you pursue, Ruth

“I am a judge, born, raised and proud of being a Jew. The demand for justice, for peace, for enlightenment runs through the entirety of Jewish history and Jewish tradition.”

These words were written by Ruth Bader Ginsburg, a distinguished judge who died on September 18, 2020. Joanna Machel recalls the Jewish values which Ginsburg followed throughout her life and work. A mezuzah hung by her office door and on the wall there was a painting of the biblical precept: Tzedek tirdof – „Justice, justice shall you pursue (Devrim 16:20).”

In the next chapter of Der szwarcer jungermanczik by Jankew Dinezon (the first Yiddish bestseller translated for Chidusz by Magdalena Wójcik), we see our protagonists in floods of tears, as soon Józef will have to leave the Fridman house and his beloved Roza.

Rabbi Yonatan Neril explains what we should learn about the environment from the story of Noah: “What provoked God to carry out the most serious environmental catastrophe in human history and wipe away virtually all living creatures? The Rabbis of the Talmud teach that the judgment was sealed because of the sin of robbery (chamas). Rabbi Samphson Rafael teaches that ‘Chamas [wrongdoing] is a wrong that is too petty to be caught by human justice, but if committed continuously can gradually ruin your fellow man.’ (…) Today, perhaps the greatest risk of humans destroying the world comes not from those with the intent to do so but rather from the collective, unintentional actions of billions of people.”

This is the blessing

In a commentary of the last parsha of the Torah, Ve-zot ha-bracha, Jane Rachel Litman tells a story about the life of the first openly gay rabbi Allen Bennet: “Torah teaches us that becoming free is a lengthy struggle. In the 1970s, the gay world and Allen’s rabbinical world were completely separate. Earlier in Hebrew Union College’s history, a student had killed himself after being outed. Being gay was considered a psychological aberration, and any known gay student would have been quickly asked to leave. Allen lived those student years in the closet, his own personal Egypt”.