This month’s cover is an artistic vision of people working to help refugees in the White Building, next to Nożyków Synagogue, at 6 Twarda Street in Warsaw. It was there, after the events of the 24th of February, that the Jewish Crisis Centre was established. The newly-created body helps, on a massive scale, people fleeing from Ukraine – regardless of their nationality and religion. In early April, Michal Bojanowski talked to many people involved in helping refugees at Twarda Street. Their stories became a canvas for the reportage The Jewish Crisis Centre. If you look closely, on the top floor of the building, you will even see the clowns who came from the USA to entertain the youngest of the refugees. 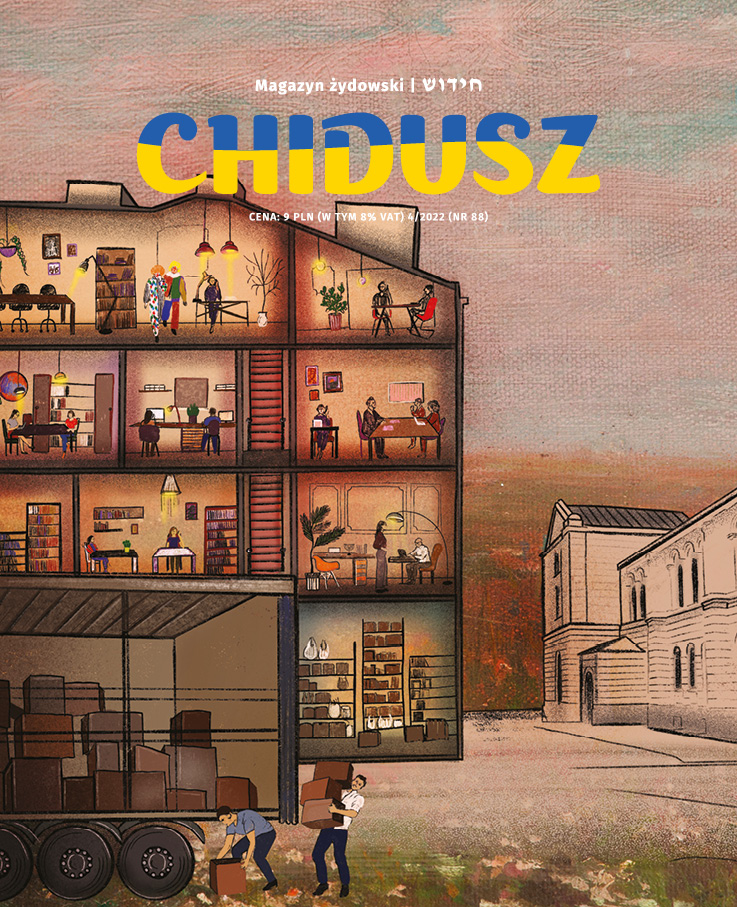 The story of helping Ukrainian refugees is completed by an interview with the head of the Jewish Community of Warsaw Lesław Piszewski, who in December 2021 spent twelve days on the Polish-Belarusian border, participating in operations to aid people fleeing from their countries. The woman with a child at the back of the cover symbolizes the position of those „second-class refugees”.

Cheering For A Better World

In Paris, Wladimir Gutowski is a legendary figure – writes in the introduction to her interview Anna Pamuła. Whenever you need to organise something, gang together, come up with a solution – he is there for you. Wladimir is 79 years old and has a mind of a young man. His blue eyes are full of light and he is always grinning. He was born in Kazakhstan but went to primary school in Łódź. He left the country in 1956. A great opponent of war and politics. Since Russia’s invasion of Ukraine, there is only one question on his mind: why are people fighting each other? He feels especially sorry for the women and their children who, after all, have nothing to do with Putin.

Part V of the Polish translation of Chaim Grade’s novel.

In this episode of the outstanding Yiddish novel Di agune, we will witness the extremely dramatic events that took place during the celebration of the Simchat Torah in a Vilnius synagogue.

In part VIII of her memoir, Kate Bornstein talks about breaking out of the heterosexist perception of trans people, working as an adult phone-line operator, the death of L. Ron Hubbard, and her mother calling her by her female name for the first time.

In twenty-three short articles, among other events, we write about the digitalization of the Łódź Jewish Cemetery archives, the historic mikveh discovered in Nysa, an Israeli start-up developing a breakthrough method of treating PTSD with psychedelics and American summer camps for transgender youth.