The Torah scroll blooms with lash greenery, while the factories’ chimneys outside the window keep polluting the air.  With this issue of Chidusz we open a new cycle of Jewish environmental teachings. We also write about the Romanian writer Mihail Sebastian, whose famed novel For Two Thousand Years (written in 1934) has just come out in Polish translation. Once again, we take a closer look at the refusals the families willing to commemorate their ancestors with Stolpersteine received from some Polish municipalities, and explain the role The Institute National of Remembrance plays in these stories.

“Just as the Torah is a guidebook on mending the relationships between men and women, sibling and sibling, nation and nation, so too, the Torah contains within it commandments whose aim is to heal the brokenness in humanity’s relationship to the Earth. Shemita, the Sabbatical Year, comprises a number of the 613 commandments of the Torah. With today’s environmental challenges, these mitzvot may be more relevant and needed today than at any time in Jewish and world history”.

The whole series of eighteen teachings was produced by Canfei Nesharim, a branch of Grow Torah. We would like to thank rabbi Yonatan Neril, the founder of The Interfaith Center for Sustainable Development and the editor of the essay collection which the teachings come from, and Yosef Gillers from Grow Torah for giving us permission to publish the Polish translations of the texts. 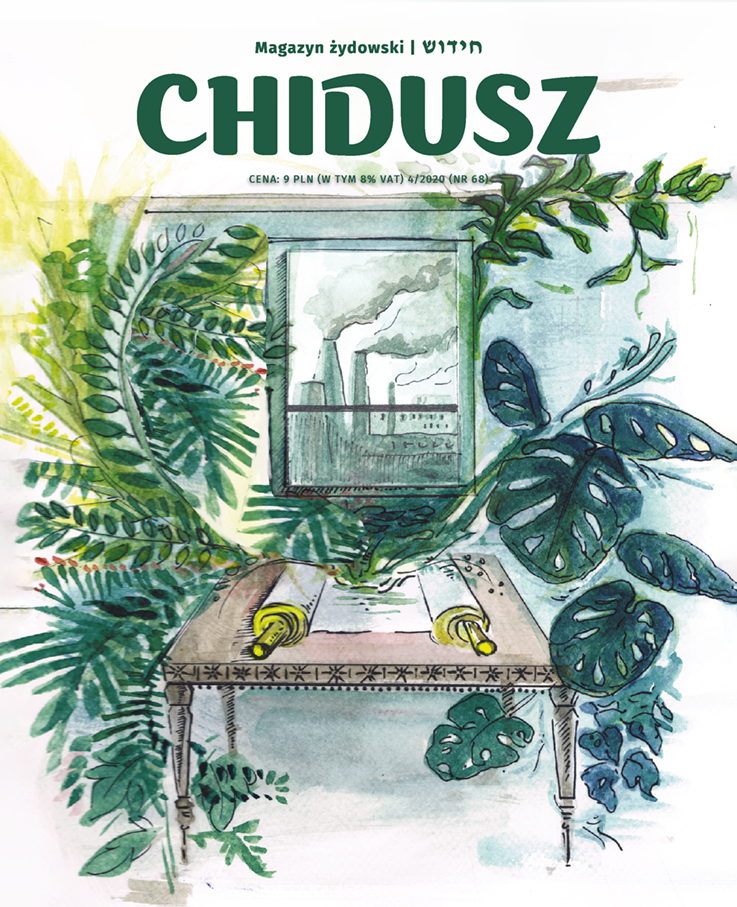 Frieda Vizel was born into a Satmar family and spent twenty six years of her life in Kiryas Yoel, New York. Then she left. Her story, although it also comes with a happy ending, has however little to do with the plot of the popular Unorthodox. The Netflix series does not show rejection, insecurity, and abuse from strangers – the reality that is faced by most of the Hasidic rebels. In a conversation with Chidusz Frieda talks about her growing up and education; her engagement and marriage, disproving many myths associated with the Hasidic community.

Struggle and martyrdom: Stolpersteine in Poland

More and more Stolpersteine are being installed in Poland each year. In 2019 the stones appeared in Zamość, Oświęcim and Wrocław. This spring – in Wrocław again. Despite the growing numbers, many municipalities in Poland have a negative attitude towards the stones and only inform the requesters about the “negative opinion of The Institute of National Remembrance”. The decisions regarding Stolpersteine in these cities are being made arbitrarily and with the exclusion of the role the local communities could play in commemorating the Jewish history. In this issue of Chidusz we analyze the cases of Będzin and Szczecin, where the local authorities refuse permissions, citing the Institute’s opinions. But to what extent are they binding? The Institute’s Office for Commemorating the Struggle and Martyrdom themselves claim that they cannot permit or prohibit the installation of Stolpersteine. It would therefore only require a bit of the authorities’ good will and their independent judgement to popularize Stolpersteine in Poland.

In 1934, when Mihail Sebastian’s novel came out, Romanians – communists, fascist, and Jews equally – were outraged. It was however only about half a century after his tragic death that Sebastian gained international fame.  His Journal, which he started to write after the controversies around For Two Thusand Years had somewhat died down, was published in 1996. Today it is considered one of the most important testimonies of the 20th century.

For Two Thusand Years in Dominik Małecki’s translation has just come out in Poland (publ. Książkowe Klimaty). The novel is a story of a young Jew, who exhibits almost perverse love for his antisemite friends. It is also a story about fear and inevitability, which were both the essence of Mihail Sebastian’s life. In this issue of Chidusz we propose reading Sebastian’s personal Journal and the novel together—as the protagonist of For Two Thusand Years shares many traits with the author. We also publish an excerpt of the novel.

The Book of Ruth is the only one among all other Biblical books to pass the Bechdel-Wallace test which measures the representation of women in literature. It would seem like the test is almost impossible to pass if only one, relatively short, passage from the Tanakh gets a positive result. Such a result is reached when a given work (1) has at least two women in it; (2) the women talk to each other; and finally (3) the subject of their conversation is not men.

As always, we publish a new chapter of Der Shvartser Yunger-mantshik by Jacob Dinezon, in translation from Yiddish by Magdalena Wójcik, and two queer commentaries to the weekly Torah portion, this time to Bamidbar (by David Greenstein) and to Naso (by Toba Spitzer).

Issue 4/2020 of Chidusz is published in cooperation with The Wrocław Publishing Program.