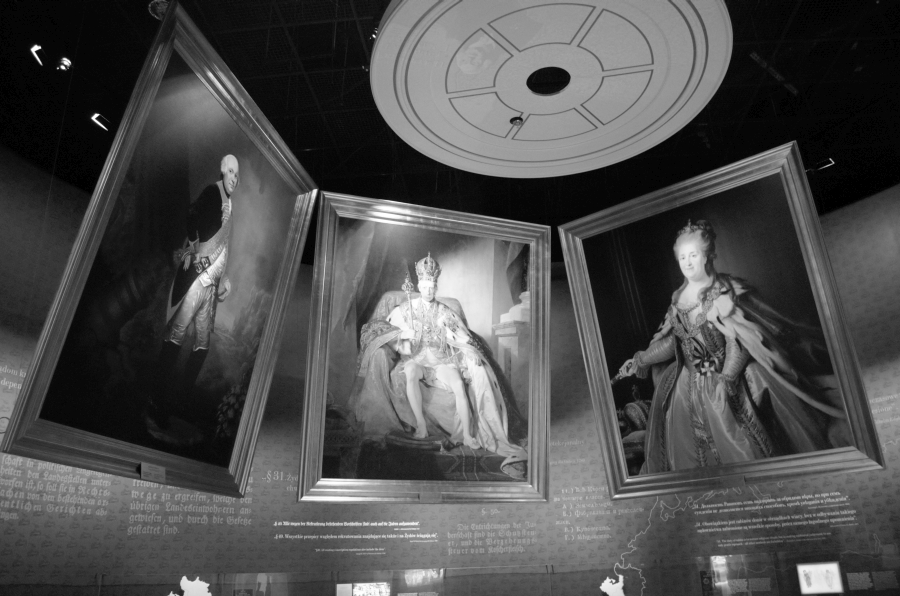 The opening of the core exhibition at POLIN Museum (Museum of the History of Polish Jews) marked, in my opinion, a fundamental change within the Diaspora in Poland. I had been skeptical about this project, fearing it might border on the kitsch and not be entirely free from manipulation. I am happy to say that I was mistaken. The level of kitsch has been kept to a minimum, although the goose in the tavern could have been dispensed with, as well as the medieval cutouts, which certainly will not be to everyone’s taste. However, even those left unmoved by the magnificent reconstruction of the synagogue of Gwoździec, which is sure to attract crowds of visitors, cannot but marvel at the footbridge in the Holocaust gallery – an artistic masterpiece of museum design. Descending the staircase, street by street, is a harrowing and heartbreaking experience. It is also a case in point made by the exhibition’s designers who intended not only to exhibit objects, but also to recreate experiences. However, it is a hazardous enterprise too. For instance, the gallery depicting the Jewish street borders on Disneyland, but in contrast the footbridge is one of the exhibition’s most successful accomplishments.

Signs of manipulation are virtually absent, although it must be pointed out that while the positive and neutral aspects of Jewish life in Poland are displayed prominently, the visitor needs to make extra effort to find examples of anti-Semitism, discrimination and pogroms. It is all there, but requires a closer look. Possibly arising from considerable political pressures, this approach can be justified by the following fact-based argument: a considerable proportion of Jews regarded their lives in Poland to be dominated by positive and neutral aspects of Jewish life, other than the fact that they had been excluded from areas of social life potentially exposing them to anti-Semitism. This perception became more prevalent with the elimination of legal social barriers, which does not mean it is a testament to the good life that Jewish people enjoyed here. It is, however, an adequate representation of the reality they experienced.

I once spent several hours outside POLIN Museum asking visitors leaving the exhibition about their reactions, and I was delighted to note they did not know what to think of it. They were bewildered by what they had just seen, which is a very good response. Visitors to the Warsaw Rising Museum leave the building without a shadow of doubt: they have just confirmed their belief that the uprising was great, and that it was just. Conversely, those leaving POLIN have just had their notions seriously challenged. The sheer proportions of anti-Semitism completely overwhelm the uninformed Polish visitor. Jews from abroad, in contrast, are amazed to realize how much there was beyond the anti-Semitism. An institution that challenges your ideas definitely serves its purpose.

Another interpretation of the modern period

The gallery dedicated to the postwar years in Poland also baffles Jewish visitors. Earlier, it was clear that Jews constituted and functioned as a social class, making it relatively easy to represent their lives. The elimination of class barriers made it necessary to adopt some sort of key allowing people to interpret their surrounding reality. There are currently three such keys at the disposal of Jewish historiography. According to the “Zionist key”, the Diaspora was headed toward imminent demise. The interpretation of the “assimilationist key” called on Jews to become upstanding citizens of a just democracy and their problems would disappear. Finally, the “religious key” regarded both of these to be of little importance as  what truly mattered was keeping the Torah.

Interestingly, the museum offers a fourth key, one that can be called “folkist”, a reference to the prewar Folkspartei, meaning “we are local people (folk) first and foremost.” The reasoning behind this key is basically that if someone wants to build a country in the middle of a desert – let them, it is not our problem. We live here and we are taking responsibility for the future of this country, but we do not stop being ourselves. We shall retain our Jewish identity even if we are no longer religious, because we are a separate nation. This is how we want to live our lives, working alongside other nations as the Republic of Poland; we want to have our say in shaping the future of the country. As it happens, this interpretation of the history of Jews in Poland goes against the grain of those proposed by the other three keys. Zionists would consider this perception as totally misguided, while supporters of the religious interpretation would believe it is preposterous to even be a non-religious Jew. Those in favor of assimilation, who regarded the “folkist” approach as absurd, were of the opinion that if everyone can participate in shaping the country, they cannot retain their separate identity. The fourth key, which I call “folkist” for lack of a more suitable term, represented the attitude prevalent among the Polish Jews of the inter-war period. Such was the attitude of the last significant Diaspora we had in Poland before World War II, which comes as a surprise to most Jews from abroad visiting Poland.

I find it awfully amusing how fiercely Polish this museum is. The outside world is virtually absent from the core exhibition, with two notable exceptions: the medieval gallery that shows where the Jews that settled in Poland came from, and the post-WWI gallery, which tells the story of where they headed for when leaving Poland. The rest is irrelevant. The exhibition features Remuh, but does so without mentioning Maimonides. The Rambam lived in the wrong place, so he is irrelevant. This total concentration on “us here” is both very Polish and very Jewish. I do not mean to say this was intentional, just that what we ended up with is very authentic as far as Polish and Jewish self-perception is concerned.

POLIN is not a Jewish institution – it is a Polish national institution that is subject to political pressure, which is hardly surprising given the fact this is the fate of every single institution in this country. The question is, with the recent turn toward the politics of pride as represented by Andrzej Duda, the current President of Poland, will the museum be able to withstand the pressures that are bound to surface? There are grounds for justifiable concern in light of Mr. Duda’s opinions, expressed during his debate with Bronisław Komorowski, the former President, about how misplaced it is to ask for forgiveness for what happened in Jedwabne. The idea to set up, as he has promised, a national institution for promoting the good name of Poland may only serve to fan the flames of patriotic pride even higher.

On the contested final gallery

There is no final gallery at all. We have no idea how to represent modern times, for they are still too close. Fortunately, visitors are so exhausted by this point that there is nothing they want more than to leave.

Unlike the other galleries, each of which revolves around an organizing concept, the gallery showing the Jewish experience in Poland after 1968 lacks a clearly unifying theme. The mere fact of Jewish existence proves insufficient to create a successful gallery. I am aware that the organizers were by this point frantically trying to tack on anything better than a mediocre promotional video or more material featuring talking heads. Easier said than done. Although I am critical of the final gallery,

I am unable to come up with a better idea myself. This is perhaps because I do not feel like a museum exhibit, making it difficult for me to imagine how to display such curiosities as my children, my friends, my community, and myself. Let others worry about that.  ■