In the new Chidusz – once again – a large dose of good fiction. The cover features the main character of a short story Trick by the outstanding feminist author Chris Kraus. Moreover, we write about the Yiddish language and Jewish uprisings in concentration camps. In this issue you will also read about the Shabbat, Shavuot and politics of memory.

Trick. A story by Chris Kraus

Chris Kraus is an American writer, art critic and filmmaker. She is best known for her semi-autobiographical novel I Love Dick. The book was first published in 1997 by Semiotext(e), but gained publicity only in the following decades. Today I Love Dick is considered a feminist classic. In the following story called Trick, Kraus talks about her experience of working in topless hustle bars in New York in the seventies and eighties. Trick is the first work of Kraus ever published in Polish.

At that time in New York, there were still old-school burlesque clubs featuring big-name professional strippers with managers. There were “bottomless” bars that offered ‘hot lunch’ where customers put 50 bucks on the table to get a face-full of cunt. But the Wild West didn’t offer these things. The Wild West was all about hustle. While dancers were paid $12 an hour to show up and dance alternate sets, the real money was made selling bottles of ersatz-champagne. 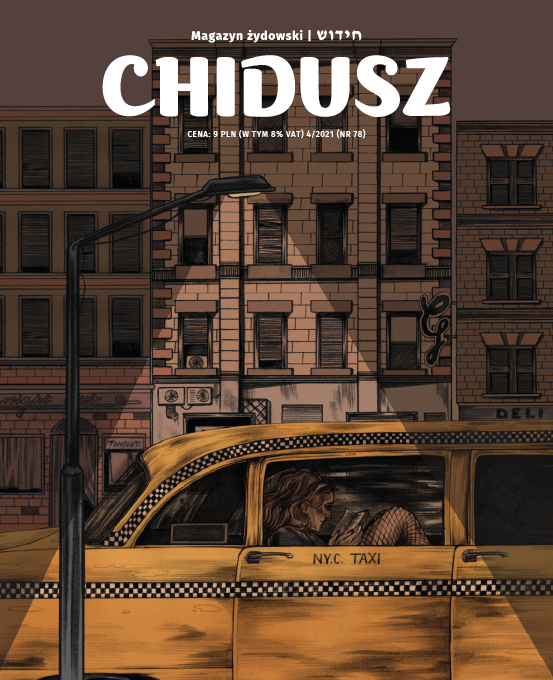 To Talk In Yiddish In Your Sleep

Anna Pamuła talks to Nadia Dehan-Rotschild, a Yiddish teacher at Maison de la Culture Yiddish in Paris, the largest cultural center of this language in Europe, about her love for Yiddish. Dehan-Rotschild is also a translator of Avrom Sutzkever, Sholem Aleichem, Yona Rosenfeld and many others into French.

Is there anything in Yiddish that cannot be translated into French?

No, I don’t believe that. Everything can be translated. If someone says it’s impossible, it means they’re lazy. Of course, Bengshaft is not the same as French nostalgia, Portuguese saudade or English spleen. Each language has its own words that are difficult to translate. You just have to try harder.

Michał Bojanowski talks to the author Michał Wójcik about his new book Zemsta. In the book Wójcik describes the fate of Jewish prisoners who formed the resistance in the concentration camps during the war. The book Zemsta. Zapomniane powstania w obozach zagłady: Treblinka, Sobibór, Auschwitz-Birkenau (Revenge: The Forgotten Uprisings in Concentration Camps: Treblinka, Sobibór, Auschwitz-Birkenau) was published in April by Wydawnictwo Poznańskie.

Can the short speech given by Monika Krawczyk on the 77th anniversary of discovering the “Krysia” bunker be a perfect example of the new Polish politics of memory? Michał Bojanowski writes about the words of the new head of Jewish Historical Institute.

On the 77th anniversary of discovering the “Krysia” bunker Monika Krawczyk, instead of talking about treason, quotes the words of the murdered Jews who express gratitude to Poles who had previously helped them. As if that were not enough, the new head of the JHI suggests that in the search for historical truth we should, above all, think about others and…  the Righteous Among the Nations.

In the seventeenth episode of the first ever Yiddish bestselling novel, Yankev Dinezon’s Der Shvartser Yunger-Manthik (The Dark Young Man), fortune finally smiles upon Józef. After many months in prison, there is hope for freedom.

Slowing Down on Shabbat

Rabbi Yonatan Neril on spiritual and ecological benefits of the Shabbat:

Today we live in a society which is constantly doing without sufficient regard to being, and at the same time, transforming the natural world without taking time to reflect on the long-term consequences. ‘Work hard, play hard.’ This saying highlights two key drivers of environmental degradation: production (work), and consumption (play). The society that rests and reflects the least is the same society that extracts and consumes the most. This mastery of the earth without sufficient contemplation of its consequences has extincted species, altered the climate, and polluted the air.

Trance and Trans at Har Sinai

Author of a queer commentary for Shavuot Rachel Biale wonders if there is a way to read the imagery of the revelation at Mount Sinai with a “queer eye”:

While “the people” includes both men and women, the target audience is clearly framed as men, who must not approach women. There is no word about women approaching men or women (or, for that matter, possible male homosexual liaisons). Although, as we shall soon see, the encounter with God is rife with homosexual and transgender possibilities, the frame of reference of the earthly gender separation is thoroughly heterosexual.