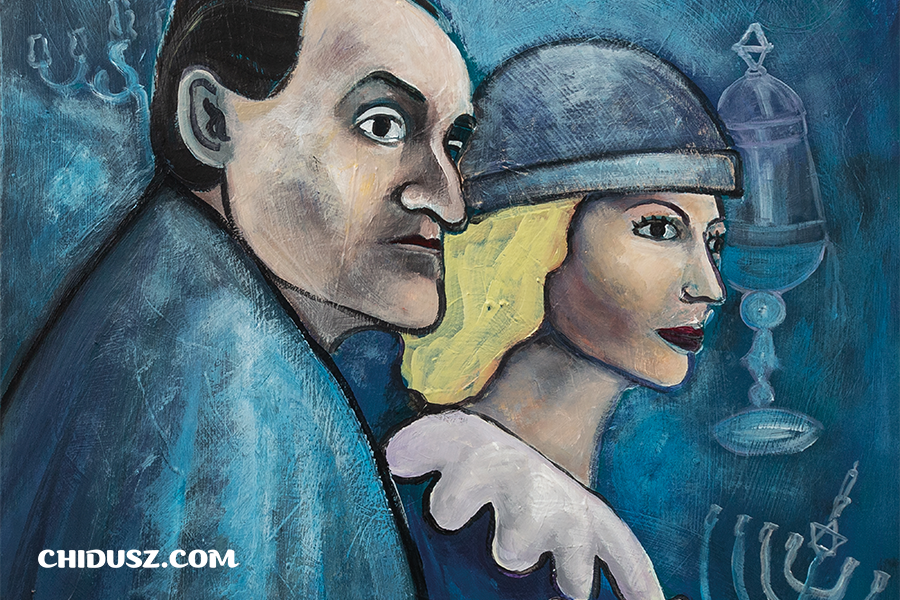 Read what we write about in the current Polish-language issue of Chidusz.

Depicted on the cover are Joseph Opatoshu and his wife Adela. Their relationship is the topic of a fascinating interview, conducted by Christa Whitney, with their only grandson, Dan. Opatoshu had a fascination with Judaica. Every corner of his house in New York City was filled with Hanukkah menorahs, Shabbos candlesticks, and even a substantial ark, with a scroll done on parchment. Hence, the Judaica on the cover, painted on canvas by Katarzyna Modzelewska. The style of the painting refers to the works of Marc Chagall – a close friend of Opatoshu. Dan’s tale of his grandparents, under the title Joseph Opatoshu Looks at the Vistula, will be published in two parts, in Chidusz 9/2022 and 10/2022. 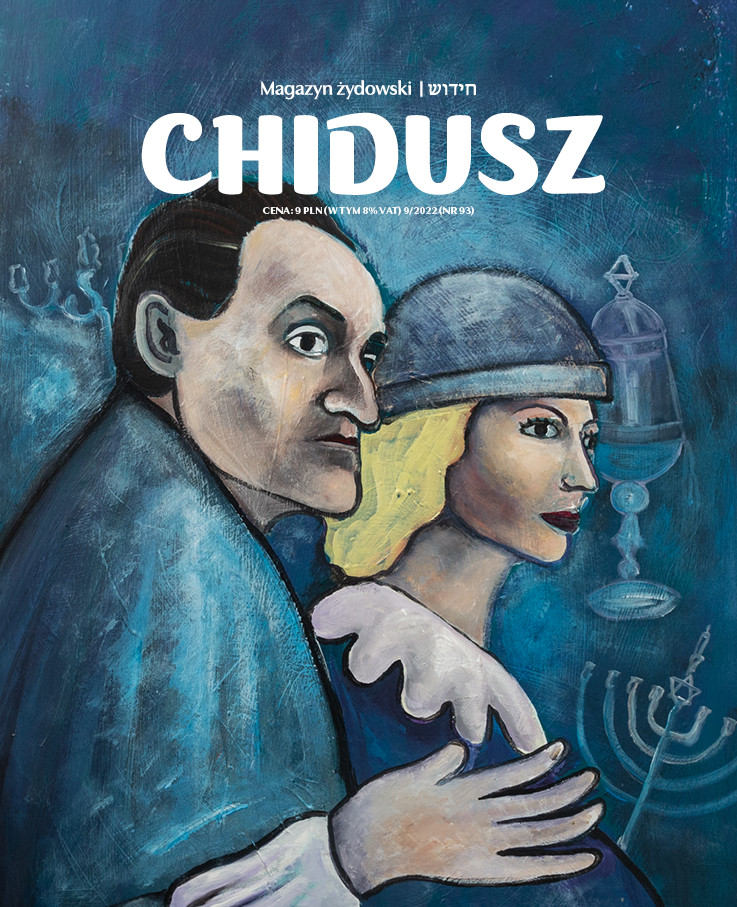 In the 1920s, the three families, every summer, would rent a large house in Upstate New York together. The Leivicks had one child, Danny Leivick, who I might have been named after. The Glantzes had one child, Dina, and Opatoshu had one child, David. D-D-D. And they, and the parents, would spend the summers in this house as this extended shabes tish, where they would write, and debate, and collaborate, on editing publications, and stuff like that, all together. The one wrinkle in the relationship, was that for the course of the summers, the Glantzes and the Opatoshus would switch mates, and my grandfather would have a bedroom with Fanya Glantz, and Adela, my grandmother, would share a bedroom with Glantz. That relationship only would exist for the course of the summer. When they would go back to the city, at the end of the summer rental, they’d go back to their own homes. However, the wives still remained the major muse for the other.

In Polish Woods by Joseph Opatoshu

Part II of the possibly most beautiful novel about Polish-Jewish relations. In Polish Woods by Joseph Opatoshu, in pre-war saul Wagman’s translation from Yiddish into Polish.

The very first Jewish feminist theologian Judith Plaskow looks back at her founding midrash about Lilith:

My story, “The Coming of Lilith,” both does and does not fit into this recent explosion of feminist midrash. First of all, unlike most examples of the genre, it is a midrash on a midrash, and not on a biblical text. In beginning from the Lilith story in the Alphabet of Ben Sira rather than from Genesis, I comment on the biblical creation narrative only indirectly. Second, and more significantly, I did not intend to write an interpretation of the traditional midrash but to capture the experience of consciousness-raising within a religious framework. I cannot remember now how I had even heard of Lilith, but I borrowed her tale because it fit my contemporary need. I did not realize that in retelling her story, I was doing for the traditional midrash what it had already done for the biblical text. And yet, once the story was completed, it read as a midrash on a midrash of creation, and to that extent stands in the stream of Jewish feminist midrash that was to follow.

Judith Plaskow’s essay from the collection The Coming of Lilith is the first of her five texts commenting on the complexity of interlocking oppressions. Plaskow questions the “Jesus was a feminist” myth and shows how it can be abused in Christian notion against Judaism:

There is a new myth developing in Christian feminist circles. It is a myth that tells us that the ancient Hebrews invented patriarchy: that before them the goddess reigned in matriarchal glory, and that after them Jesus tried to restore egalitarianism but was foiled by the persistence of Jewish attitudes within the Christian tradition. It is a myth, in other words, that perpetuates traditional Christianity’s negative picture of Judaism by attributing sexist attitudes to Christianity’s Jewish origins, at the same time maintaining that Christianity’s distinctive contributions to the “woman question” are largely positive. The consequence of this myth is that feminism is turned into another weapon in the Christian anti-Judaic arsenal. Christian feminism gives a new slant to the old theme of Christian superiority, a theme rooted in the New Testament and since reiterated by countless Christian theologians.

Part X of the Polish translation of Chaim Grade’s novel.

In this episode of the outstanding Yiddish novel Di agune, Kalman (husband of the eponymous agune), falls into the trap of Moishe Cyrulnik and his gang of house painters. It looks as if the entire Vilnius has colluded to destroy Merl and Kalman’s lives. Will the spouses stand the test?

Last Good Deed of the Tomato

Getzel (George) Selikovitsch was born in 1855 in Lituania. Though he came from a traditional family, he emigrated to Paris to study Egyptology. In 1885 he moved to Sudan, where he served as a translator for British forces trying to repel the Mahdi army from besieged Khartoum. Polish reader surely remembers the Mahdist War from the novel In Desert and Wilderness.

We present to you one of his humoristic stories Last Good Deed of the Tomato, translated from Yiddish by Magdalena Wójcik.

Jewish Press Review from Poland and Around the World

In a couple of dozens of short articles, among other topics, we write about the new permanent exposition in Wrocław synagogue; MP Mularczyk questioning, on Twitter, the very famous Willy Brandt’s gesture; Prof Grabowski lawsuit against B. Wildstein; the triumph of Haifa football team over Juventus Turin; new Albert Einstein Museum in Jerusalem; the oldest historical evidence of opium smoking; and Kanye West’s anti-Semitism.