This issue of Chidusz is exceptional. Decades after Grade’s death, his prose is finally coming out in Polish. Starting this month, we will publish, in sixteen episodes, the Polish translation of Aguna – the most famous novel of this outstanding Yiddish writer.

Chaim Grade ranks among the most important Yiddish writers of the post-Holocaust period. His unsentimental depictions of rabbinic high culture and life on the Jewish streets of Vilna both describe memorable characters drawn from different strata of society, and dramatize the contest of ideas and moral impulses that defined his community in the interwar period. (YIVO)

Starting this month, in sixteen consecutive issues, we will present to you the first Polish translation of Grade’s Aguna.

Moritz recalled quite clearly that Merl was the first to go out on anti-Czarist demonstrations. Neither Cossacks’ whips nor bullets frightened her. He knew that she could remain silent for a year, but when she said something, she meant it.

“But I want to marry you,” he said, backing toward the door. “I want you to be my wife, not my mistress. And I won’t go begging to a rabbi for permission.”

“Drop dead, you lying boaster.” She stood before him, the pressing iron raised aloft. “You aren’t worth a hair on the cantor’s head. Yes, I do want to marry him. And to please him I’m going to  turn the world upside down in order to get a rabbi’s permission. Get out, you low-down worm, or I’ll split your head open!” (excerpt from the English translation of the novel) 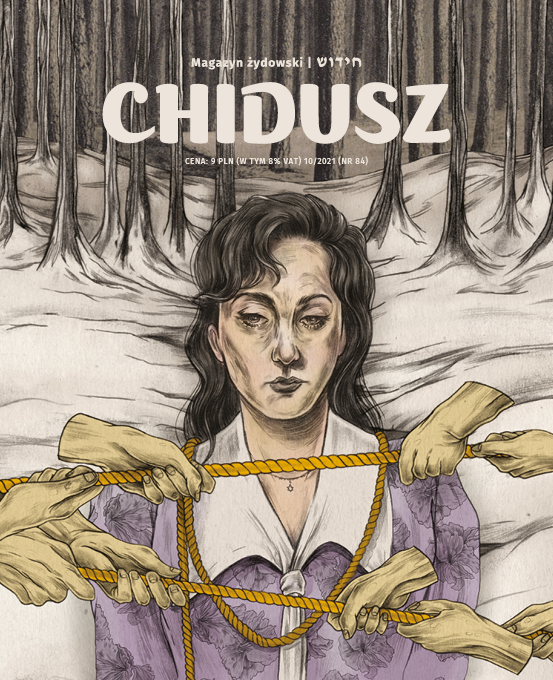 I Never Had a Chance to Be a Hero

Piotr Smolar is a reporter for the French daily Le Monde. He was born in France, his parents are Polish. His father, Aleksander Smolar, is the president of The Stefan Batory Foundation, and his grandfather, Grzegorz (his actual name was Hersh), was a communist politician, journalist and social activist. Most of his family perished in the Holocaust. After leaving the Minsk ghetto, Grzegorz became the political commissar of the Soviet partisan units. Up until 1968, he was the head of the Folks-shtime – the Yiddish press organ of the Polish United Workers’ Party, which was his great passion. In 1970 he left for Israel.

Smolar tells the story of his father and grandfather in his poignant book Zły Żyd (A Bad Jew), where he also explains his journalistic decisions. In an interview, Anna Pamuła talks to Piotr Smolar about his work and what it means to be a prisoner of your identity.

In part IV of her memoir, Kate Bornstein talks about her dream to become a nun, her naval career in Sea Org (as a member of crew on one of yachts owned by the Church of Scientology), examining mental mass with an electropsychometer and L. R. Hubbard’s emotional tone scale.

Rabbi Yonatan Neril on sustainability in settling the Land of Israel:

The Jewish people have been around a long time—3747 years since Abram and Sarai came to Israel, of which over 1500 years involved significant settlement in the Land of Israel. How did they manage to live in the Land of Israel for so long? While the Torah teaches us that Divine Providence (in response to the people following the commandments) played the fundamental role, the Oral Tradition as redacted in the Mishna also provides instructive guidelines for living in the Land of Israel. These teachings can inform us about living sustainably on the Land over a long period of time.

The Woman With the Knife

In October, Wydawnictwo Poznańskie published the Polish translation of The Slaughterman’s Daughter, an outstanding novel by the Israeli writer Yaniv Iczkovits. The book has won many awards, including the prestigious Wingate Literary Prize, Agnon Prize for the Literary Arts and Ramat Gan Prize. It is a picaresque novel about a woman, armed with a butcher’s knife, who embarks on a dangerous journey to restore peace in her family.

Magda Wójcik talks with the author about the unusual fate of Fanny Keismann, the main protagonist.

In her essay Joanna Maria Machel explains the differences between the ‘Christian Satan’ and the ‘Jewish one’.

We open every issue of Chidusz with our press review – over a dozen short articles on interesting or surprising events from the Jewish world. This month we talk about Steven Spielberg’s West Side Story, why Natalie Portman didn’t like being Léon’s Mathilda, who refused to accept the Witold Pilecki International Book Award and why even fish need to sleep.