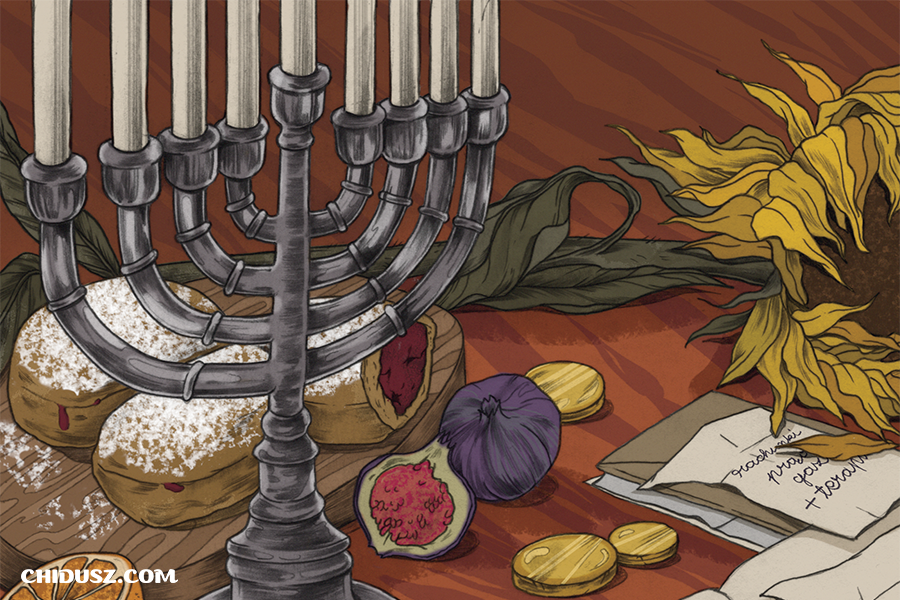 We open this issue of Chidusz with four blank pages. This is our protest against the unfair distribution of government subsidies. The Department of National and Ethnic Minorities did not grant any subsidies for publishing Chidusz in 2023, while Słowo Żydowskie – considered a pro-government publication – received PLN 300.000 support.

The blank pages symbolise all the interviews and articles we did not write because we either could not afford them or were too busy trying to make ends meet. Last year, the Department of National and Ethnic Minorities granted Chidusz PLN 30.000 which is barely enough to publish one issue of the magazine.

Financial problems affect most of us – we have to pay off expensive (and exploitative) housing loans, wait in long queues to see a doctor, rub our eyes in disbelief at cash registers in discount stores and turn our radiators off.

Some comfort can be brought by celebrations of Chanukkah. A holiday miracle would be especially useful this year. That is why, this year we wish you not only joyful Holidays but also the Festival of Lights full of miracles! 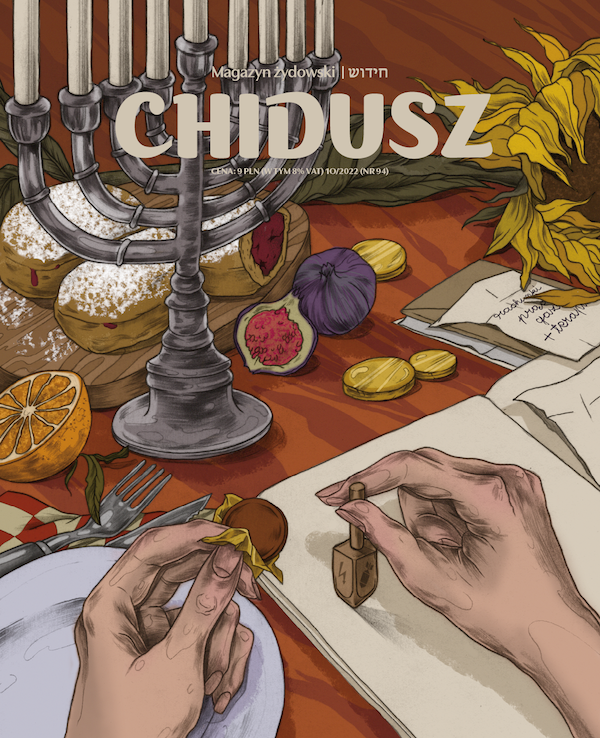 Another essay from the collection The Coming of Lilith by the great Jewish thinker and feminist theologian Judith Plaskow.

Like other oppressed groups, Jews must know about the dominant culture, but members of the dominant culture need to know nothing about them. Ironic as this is given the Jewish roots of Christianity, American Jews necessarily acquire a surface knowledge of major Christian beliefs and celebrations, while particularly outside of New York City, Christians are often totally ignorant of Jewish holy days and their meaning.

Feminist Anti-Judaism and the Christian God

Wondering what Jews think about Jesus or why Jews reject Jesus as the Messiah, Christians seem to find it almost impossible to hear that Jews don’t think about Jesus—except when Christian questions and a Christian culture force them to do so—and that they do not reject Jesus, they are simply not interested in him. The fundamental irrelevance on a religious level of Christianity to Judaism means that Christians taking Judaism seriously as an independent, living tradition must rethink the self in a way that is not true for Jews in relation to Christianity. What does it mean to affirm Christian identity without defining it over against Judaism? This is a question that the Christian tradition has never satisfactorily answered. And in large measure, it still has not been resolved by Christian feminists, who have simply turned feminism into a new way of yet again defining Christian identity at the expense of Judaism.

Investigation of the Smocze Street

Benny Mer lives in Israel but feels as much at home in Warsaw, or more precisely – on Smocze Street. The stories of its residents are told in the book Smocze. It’s a biography (not yet translated into Polish) of a Jewish street in Warsaw. Benny Mer dug up from the archives the stories of every house from number 1 to 62, where tens of thousands of people lived. The labyrinth of courtyards, dead ends, kiosks, bazaars, workshops, theatres and brothels practically formed a town of its own. In an interview, Benny Mer tells Anna Pamuła about the treasures he discovered.

Joseph Opatoshu Looks at the Vistula

Part II of an interview with Dan Opatoshu, the grandson of Joseph Opatoshu. Dan talks about his grandfather’s political views, his trips to Europe and the summer holidays they spent together.

My grandfather’s world was, even though he was living in America, really a transnational world of Yiddish culture. He travelled back to Poland twice in the ’20s, I believe in ’22 or ’23, and in ’28, and then again in the early ’30s. And a trip to the Soviet Union then, and then a trip to Palestine, and trips to Paris, and South America. When he started making trips to Europe in the early 1920s, it was clearly the successful return of the prodigal son, the man that made good in the new world. And actually, there’s a cartoon that, that I saw on many occasions, and I must have, somewhere in storage, but I’ve not been able to come upon it, in the last couple of years. I believe there might be a copy of it in the YIVO archives, that was published, I believe, in a Warsaw newspaper, and the cartoon shows my grandfather, Opatoshu, lying in a hammock, in a large grove of trees. And it’s a great caricature of his face, which was easy to caricature, with the big nose going down, the chin coming out, and the underbite, and the big forehead, and he’s lying there, and his lackadaisically picking leaves off the trees that surround him. And every leaf is a dollar bill. And across the canopy of leaves, it says In poylishe velder, In Polish Woods, which was his most renowned novel. So, as far as the Jewish community in Europe was concerned, here was just this millionaire with the dollars flowing in from the success of this book. He also kept up, in person, in addition to making money, out of doing it, publicizing the books, and giving lectures, and things like that.

In Polish Woods by Joseph Opatoshu

Part III of the possibly most beautiful novel about Polish-Jewish relations. In Polish Woods by Joseph Opatoshu, in pre-war Saul Wagman’s translation from Yiddish into Polish.

Part XI of the Polish translation of Chaim Grade’s novel.

In this episode of the outstanding Yiddish novel Di agune, we meet for the first time Zelda and Freidka – the daughters of Guta, Merl’s older sister.

The Faces of Shoa Victims

In an interview conducted by Katarzyna Andersz, software engineer Daniel Patt talks about how he came up with the idea of using facial recognition technology for genealogical research. Thanks to his From Numbers To Names project, it is now possible to compare our photographs or photographs of our ancestors to the ones stored in a still-growing database of over half a million photos from the Shoa period.

Jewish Press Review from Poland and Around the World

In a couple of dozens of short articles, among other topics, we write about Tusk calling Kaczyńskie a „Jew”; an anti-Semitic rally in Krakow; Robert Lewandowski’s bodyguard; the new coalition of Benjamin Netanyahu; anti Israel UN resolution; the results of new semen meta-analysis; Israeli low-energy air conditioning system and a documentary on conversion therapy in ultra-Orthodox Jewish communities.